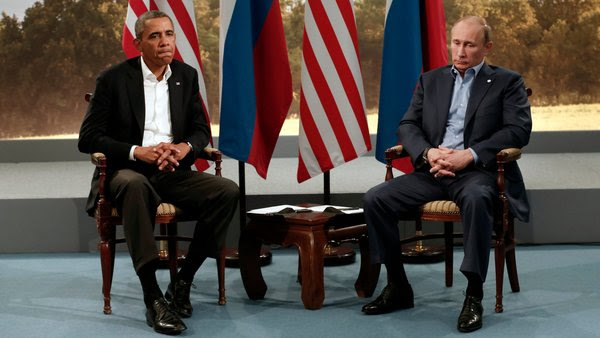 … the two bruising encounters [with President Xi Jinping of China and President Vladimir V. Putin of Russia] in such a short span underscore a hard reality for [President Obama] delivered as he heads deeper into a second term that may come to be dominated by foreign policy.

Thus wrote Mark Landler and Peter Baker about the Apologizer-in-Chief in the New York Times a couple of years ago, before spelling out the harsh reality in question:


his main counterparts on the world stage are not his friends, and they make little attempt to cloak their disagreements in diplomatic niceties.


Even his friends are not always so friendly. On Wednesday, for example, the president is to meet in Berlin with Chancellor Angela Merkel of Germany, who has invited him to deliver a speech at the Brandenburg Gate. But Ms. Merkel is also expected to press Mr. Obama about the National Security Agency’s surveillance programs, which offend privacy-minded Germans.

For all of his effort to cultivate personal ties with foreign counterparts over the last four and a half years — the informal “shirt-sleeves summit” with Mr. Xi was supposed to nurture a friendly rapport that White House aides acknowledge did not materialize — Mr. Obama has complicated relationships with some, and has bet on others who came to disappoint him.

… Even with friends, however, there is tension. President François Hollande of France was initially thrilled with Mr. Obama because he saw him as an ally against Ms. Merkel on economic issues.

But by the time they met at the Group of 8 summit meeting in Northern Ireland on Tuesday, the relationship had soured, according to French analysts, because France is frustrated that the United States did not do more to help with the war in Mali and resisted a more robust response to Syria.

Mr. Obama differs from his most recent predecessors, who made personal relationships with leaders the cornerstone of their foreign policies. The first George Bush moved gracefully in foreign capitals, while Presidents Bill Clinton and George W. Bush related to fellow leaders as politicians, trying to understand their pressures and constituencies.