In 2015 alone, France suffered more casualties from gun violence than the U.S. has suffered during Obama's entire presidency

What we basically get — from sources as diverse as The Washington Post (The Volokh Conspiracy's David Kopel), as The Wall Street Journal (Joe Palazzolo and Alexis Flynn on the forthcoming book, “Mass Shootings: Media, Myths, and Realities), as PolitiFact (Keely Herring and Louis Jacobson), and as Fox News and IBD (the same piece by John R. Lott) — is the shooting down of Barack Obama's wishful thinking regarding "these mass shootings", i.e., that this type of thing "just doesn’t happen in other countries.”

This statement, in Paris of all places (!), only two or three weeks after Islamist killers murdered 130 people over the course of not much more than a couple of hours. (No wonder French called him un connard et un trouduc (an a**hole); to which I can do little more than make the, rather unhelpful, remark, Congratulations Europeans! You got the U.S. president that you had been pining for!)

As I wrote in my in-depth examination of the gun control issue [slightly redacted],


it is easy for leftists, American as well as foreign, to tout the success of the gun control laws in the rest of the western world and to say that "this type of mass violence does not happen in other advanced countries” when you ignore:
• the 1996 massacre of 16 children at a Scottish primary school;
• the 2000 killing of eight kids in Japan;
• the 2002 deaths of eight people in Nanterre, France;
• the 2002 killing of 16 kids in Erfurt, Germany;
• the 2007 fatal shootings of eight people in Tuusula, Finland;
• the killing of 10 people at a Finnish university less than a year later;
• the 2009 killing of 15 people in Winnenden, Germany;
• and, needless to say, Anders Breivik's 2011 mass murder of 77 Norwegians, most of them teenagers.

Is it unrealistic to wonder whether the tolls would have been lesser had a few of the adults in each place — as well as in Paris's Bataclan a couple of weeks ago — carried a weapon and tried to shoot back at the respective killers?

(Update: a slightly revised version of the above argument was published in the New York Times.)

Listen some more to John R. Lott:
(John R. Lott, Jr. is a columnist for FoxNews.com. He is an economist and was formerly chief economist at the United States Sentencing Commission. Lott is also a leading expert on guns and op-eds on that issue are done in conjunction with the Crime Prevention Research Center. He is the author of eight books including "More Guns, Less Crime." His latest book is "Dumbing Down the Courts: How Politics Keeps the Smartest Judges Off the Bench" Bascom Hill Publishing Group (September 17, 2013). Follow him on Twitter@johnrlottjr.)


In just 2015, France suffered more casualties – killings and injuries – from mass public shootings than the U.S. has suffered during Obama’s entire presidency (508 to 424). This number includes the San Bernandino massacre on Wednesday.

Obama also overlooks Norway, where Anders Behring Breivik used a gun to kill 67 people and wound 110 others. Still others were killed by bombs that Breivik detonated.  Of the four worst K-12 school shootings, three have occurred in Europe. Germany had two of these — one in 2002 at Erfut and another in 2009 at Winnenden, with a total death toll of 34.

Obama isn’t correct even if he meant the frequency of fatalities or attacks. Many European countries actually have higher rates of death from public shootings that resulted in four or more murders. It’s simply a matter of adjusting for America’s much larger population.

… In terms of the frequency of attacks, the United States ranks ninth, with 0.09 attacks per million people.  Macedonia, Serbia, Switzerland, Norway, Slovakia, Finland, Belgium, and the Czech Republic all had higher rates.

… It takes a lot of time and effort to find all the cases, but if you get all the attacks in the U.S. and miss those in other countries, it makes the U.S. look a lot worse.

… The president’s statement was also limited in another sense.  He was referring only to shootings in his statement, but bombs are frequently used elsewhere in the world.

The Boston Marathon bombing was a rare exception these days in the United States. But countries such as Russia have frequently suffered bombings. Indeed, since 2009, the nation has seen 1.31 deaths per million from bombings that caused four or more fatalities.

… Obama keeps using these attacks to advocate requiring background checks on private transfers of guns. Such a requirement, however, already exists in France and almost all of Europe.

The background checks failed. So too did France and Belgium's complete bans on the weapons used in those attacks. The terrorists who attacked those countries still got the weapons that they wanted.

… There is another common factor between mass public shootings.  Virtually all of the attacks in America and Europe are taking place where general citizens can’t carry guns for protection. At some point, it has to become apparent to gun control advocates that gun-free zones only protect the killers.

But as The Volokh Conspiracy's David Kopel points out in the Washington Post,


Obama explained to Russian President Dmitry Medvedev in March 2012, “After my election I have more flexibility.” This was an accurate prediction, and not just about foreign relations. After winning reelection in November 2012, President Obama in December 2012 used the Newtown, Conn., murders as the basis to make gun control the primary focus of his political efforts through April 2013. He has promised that gun control will be his top priority during his final year in office. When commenting on mass murders in the United States, President Obama has repeatedly claimed that such crimes do not occur in other countries.

Gun Free Zone points out (obrigado per Sarah Hoyt) that the way the élitish liberals look at this issue, as with all others, is as human beings as part of a herd:


As Mark Twain famously wrote:  “There are three kinds of lies: lies, damned lies, and statistics.”  I don’t know if the “shoot and kill about 30 U.S. citizens every day” statement is accurate, but the way [Brett Arends] approaches it is not.  Assuming the number is accurate, those shootings are not evenly distributed across all law abiding gun owners.  It’s not as though 30 random law abiding gun owners a day decide to kill someone.  The overwhelming majority of shootings are concentrated in certain areas and socioeconomic groups (criminals be committing crimes).  This video breaks the numbers down much better than I can do a write up here.  The point is, the vast majority of law abiding gun owners will never shoot anybody, ever. 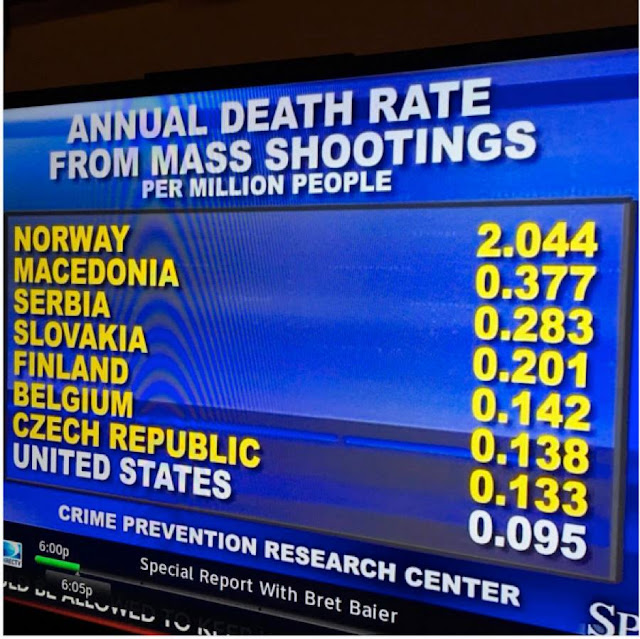