Racism on the Rise in France 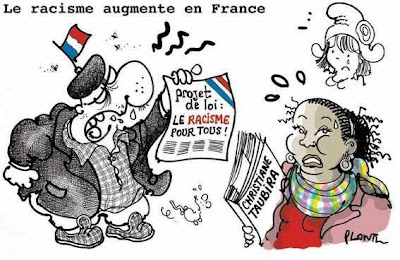 Racism is on the Rise in France, says Plantu, who mixes racism with anti-gay marriage, calling conservative Frenchmen opposed to Christina Taubira's leftist policies (the "colored" justice minister who hails from French Guiana was recently called a monkey by schoolkids in Angers) and those opposed to gay marriage (aka Taubira's Marriage for All bill) equally despicable.