Richard Aldous has a New York Times book review of Margaret MacMillan's The War That Ended Peace while Max Boot proceeds to review Max Hastings's Catastrophe 1914 (Europe Goes to War). Debunking some myths of World War I is the title given to the Max Boot book review, which presents fascinating facts:

It is right and proper that World War I continues to be remembered not only for the scale of its suffering — still second only to World War II — but also for the breadth of its impact. Without the war, there very likely would have been no Nazi Germany and no Soviet Union. For lack of Russian support, 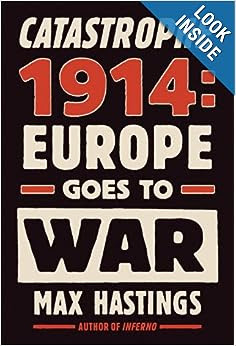 there very likely would have been no Communist China either. Hitler, Stalin and Mao might have remained nonentities, and World War II, the Holocaust, the Korean War, the Vietnam War and the Cultural Revolution would never have occurred. More speculatively, even the Iraq war and today’s Syrian civil war might never have occurred, because Iraq and Syria, like most of their Middle East neighbors, were bastard offspring of the War to End All Wars.

Yet, for all its importance, World War I continues to be misunderstood by most ordinary people who have not yet caught up with the evolving consensus of historians. Three big myths, in particular, dominate the popular perception. First, that it was an accident, a war nobody wanted — a view immortalized in Barbara Tuchman’s beautifully written if factually questionable 1962 book “The Guns of August.” Second, that it didn’t really matter who won — that there was scant difference between the Central and Entente Powers. And third, that soldiers were needlessly sent to slaughter by unfeeling and cloddish generals — “lions led by donkeys” in the popular parlance.

… All sides … might be seen as equally to blame for the resulting conflagration, but Hastings, following in the footsteps of seminal historians like Fritz Fischer and Luigi Albertini, will have none of it. 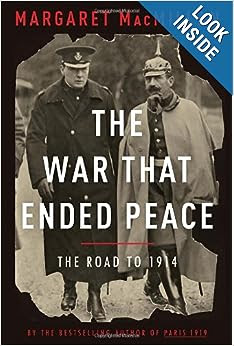 writes. “Even if it did not conspire to bring war about, it declined to exercise its power to prevent the outbreak by restraining Austria. Even if Berlin did not seek to contrive a general European conflagration, it was willing for one, because it believed that it could win.”

Hastings is equally scathing, and justifiably so, in dismissing those who claim that the outcome of a German victory would have been benign, in effect creating a European Union a few years ahead of time. “Even if the kaiser’s regime cannot be equated with that of the Nazis,” he writes, “its policies could scarcely be characterized as enlightened.”


Although all sides were guilty of exces­ses,

Hastings writes that the Western allies “behaved significantly better than did the Central Powers”: “No major massacres of civilians were ever laid at the door of the British, French or Italians to match those repeatedly committed by the Germans, Austrians and Turks.” Nor did the Western states impress slave laborers, as the Germans did with Belgian and French men in areas they occupied.

Related: Preparing to Give 2014's World War I Commemorations the PC Treatment ("Everyone is terrified of being called triumphalist or, worse still, jingoistic")

"An outstanding historian of the Second World War, Max Hastings has made a victorious foray into a conflict with which he is less familiar" writes Hew Strachan, comparing Catastrophe 1914 with Barbara Tuchman's “The Guns of August,” and showing how the she was influenced by her life and times (JFK, the Cold War…). "Tuchman has been supplanted."

Related: 1914's Pacifist Rebels Gloriously Remembered by Director of World War I Film Which Was in Fact an Anti-Bush Screed
Posted by Erik at 11:11