WWII: Disney, and Donald, and Mickey to the Front 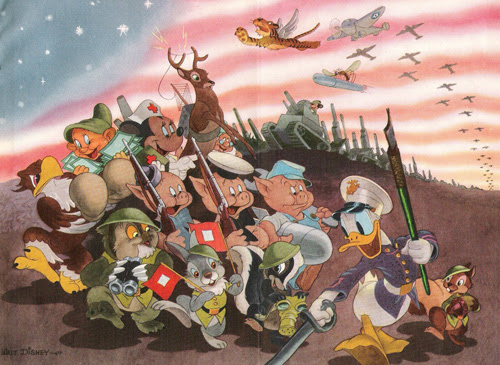 During World War II, Walt Disney sent characters from his menagerie to


take part in home front and front line activities. Donald Duck, as a marine, symbolizes that the pen is now equal to the sword, while other characters represent a variety of wartime roles: Thrifty Pig symbolizes the might of industry, Minnie Mouse is a Red Cross volunteer, Dopey the dwarf purchases war bonds, Flower the skunk is a member of the chemical warfare service, and Thumper the rabbit is in the army signal corps. The insignia characters for the Flying Tigers and the PT boat Mosquito Squadron in the sky represent two of more than 1,200 designs created at the Disney studio.