writes Nina Shapiro (thanks to Arf) whose Seattle weekly article helps explain what prompted Stephen Baskerville to write the book Taken Into Custody (The War Against Fathers, Marriage, and the Family). His latest article is "The Rape of Justice", published in the Salisbury Review (PDF).

"Are you Jim?" the deputy asked.

The deputy then informed him that not only was he no longer welcome inside his own house, he wasn't allowed even to collect his things. The officer handed him a suitcase his wife had packed and a $3,000 check—also from his wife, who earned far more than he did.

… Had he been charged with domestic violence in criminal court, where guilt must be proved beyond a reasonable doubt and the standards of due process are high, this might not have happened. But Jim's fate was decided in a very different venue: family court.

It's a court like no other—a hugely busy and rancorous place where the most personal aspects of people's lives are not only on display, but judged and reshaped in proceedings that often last no longer than 20 minutes. Appointed commissioners, rather than elected judges, make many of the most crucial decisions. And the standard of evidence (known as "preponderance of the evidence") is the lowest allowed by law.

For years, dads'-rights groups have claimed that family court overwhelmingly favors women, particularly when it comes to custody. In former times, when dads generally did far less hands-on child-rearing than moms, those claims tended to be viewed as the ranting of bitter misogynists.

… the most damaging allegation—the one that can change everything in an instant—is domestic violence. 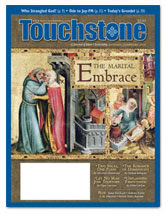 That's why, Rolfe says, "there are attorneys who will advise a client to accuse the other party of domestic violence in order to gain an advantage."

The accusations may not constitute what the general public thinks of as domestic violence. "Frequently, it's not a big thing that you did, but the woman claims to be afraid," says Rolfe.

Yet commissioners—and what Bianco calls a "little cottage industry" of professionals used by the court to assess and treat domestic violence—tend to give those allegations credibility and see a man's denials as further proof of his guilt—the ultimate catch-22.

… the most precious relationships in people's lives—relationships that impact not only the adults standing before a commissioner but the unseen children used to being around both parents every day—are reconstituted according to whatever spin embittered spouses can put forward in the time it takes to walk around the block.

Also check out James Christianson's How I Got Custody (thanks to Arf, again)
Posted by Erik at 13:36