What Is Wrong (or Indeed Atypical) About Wanting Obama to Be a 1-Term President and Desiring His Policies to Fail?

I left this comment on the webpage of a New York Times article but, unless I am mistaken, they seem to have refused it (I just submitted a shorter version of it for a third time)… 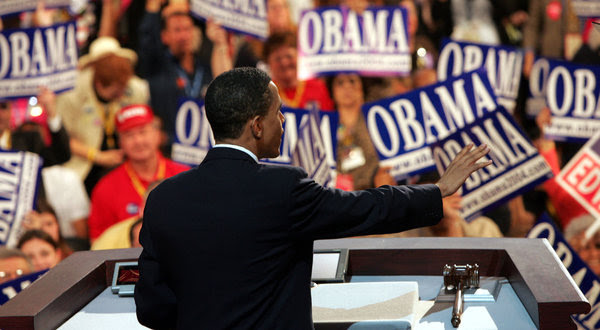 "McConnell's prime wish for Obama was that he be a one-term president" complains a Democrat.

Forgive me if I cannot build up the level of sputtering outrage that Jim Steinberg is obviously seeking.

Wasn't the democrats' goal to see Bush, and Bush, and Reagan, etc, uh (let me find the word)… fail?

Ever since Rush Limbaugh was assaulted for making his hope-Obama-fail statement in 2009, I have found the outraged over-the-top reaction of the Democrats absurd…

Now, suddenly, when the Republicans react no differently with a Democrat in the White House, the Democrats go berserk.

Note to Democrats: the USA is not a cult of the personality, with the One towering benevolently over the flock of little people, a Dear Leader and protector who is deserving of nothing but respect and gratitude from his always-reverential subjects; it's a republic where the citizen is king and the "leader" his servant. And when we, or a majority of us, do not like the job he's doing, he's out of the White House.

As for "the fact" that wishing that Obama fail "means our nation would fail along with the president", you may not have noticed, but on the watch of the Apologizer-in-Chief (a man who said in 2008 that his goal was to cut the debt in half), the debt has quintupled. Now, you can go on and on with saying that that ain't his fault, but for a number of us — and hey! maybe we are wrong — it's proof positive that the socialist-imbued college professor that he is, who has famously never worked in the private sector, has been nourished with leftist fairy tales and has no idea how to work a real economy…
Posted by Erik at 10:20