"Consider the energy and resource-intensive process required to produce a computer": Is There Really an Enviromental Benefit to Going Paperless?

[The Economist's] article on the United States Postal Service suggested that sending electronic Christmas cards over the internet is more “green” (“Neither snow nor rain”, August 20th). I take issue with that. When you take into account the entire life cycle of a piece of paper versus what it takes to send an e-card, i 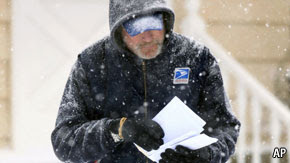 t becomes clear that there is no environmental benefit to going paperless. Consider the energy and resource-intensive process required to produce a computer: extensive mining and refining operations of dozens of minerals and metals, many of which are not recyclable and will inevitably end up in a landfill once the device is rendered obsolete by the next generation of computer, tablet or smartphone. Add to that the carbon-generated electricity needed to power computers.

Contrast that with paper, which is one of the most recycled products; last year 63% of all paper purchased in the United States was recovered for recycling. In addition, more than 60% of the energy used to manufacture paper is generated on site from carbon-neutral biomass and recovered materials from the papermaking process. In fact, many of America’s paper mills are entirely energy self-sufficient.