The Arrogance of Empire

I met a traveller from an antique land
Who said: "Two vast and trunkless legs of stone
Stand in the desert. Near them on the sand,
Half sunk, a shattered visage lies, whose frown
And wrinkled lip and sneer of cold command
Tell that its sculptor well those passions read
Which yet survive, stamped on these lifeless things,
The hand that mocked them and the heart that fed.
And on the pedestal these words appear:
`My name is Ozymandias, King of Kings:
Look on my works, ye mighty, and despair!'
Nothing beside remains. Round the decay
Of that colossal wreck, boundless and bare,
The lone and level sands stretch far away".

The EU has given the normally onanistic Architects and their would-be Medicis-with-tax-monies the chance to embarrass humanity. Not unlike previous edifices we have covered here, we find the "Europa building" championed by Herman Van Rompuy.

Kranmer has baptized it the EUterus. I would call it rather more insular than transparent or open. It’s jug-like form is a perfect place to hide, protected further still by the rectilinear and unforgiving nature of the cube it inhabits, representative of the laws of revenue absorption. 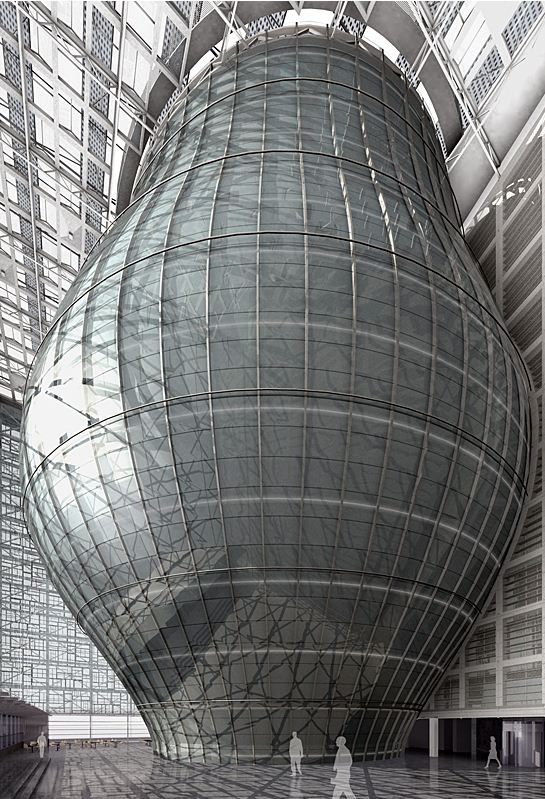 A few brave citizens should likely try to cling to its’ walls to function as an IUD. A continent that has effectively stopped reproducing should be cool with that.
Posted by Joe at 15:10