WikiLeaks: when Michael Moore's Sicko film was shown to Cuban doctors, they were 'disturbed at the blatant misrepresentation of healthcare in Cuba' 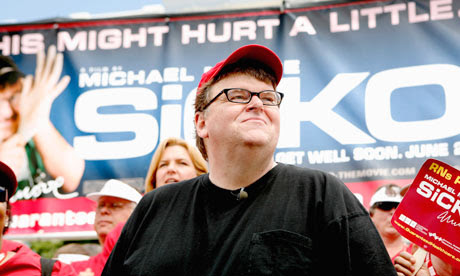 Nothing but the utmost praise is what Michael Moore has had for Julian Assange but he probably hadn't read the following WikiLeak first and, as VI puts it, "The more I read of the Wikileaks documents the more I think it has backfired on Assange's attempt to smear the US. This is one of my favorite revelations":

Cuba banned Michael Moore's 2007 documentary, Sicko, because it painted such a "mythically" favourable picture of Cuba's healthcare system that the authorities feared it could lead to a "popular backlash", according to US diplomats in Havana.

The revelation, contained in a confidential US embassy cable released by WikiLeaks , is surprising, given that the film attempted to discredit the US healthcare system by highlighting what it claimed was the excellence of the Cuban system.

But the memo reveals that when the film was shown to a group of Cuban doctors, some became so "disturbed at the blatant misrepresentation of healthcare in Cuba that they left the room".

Castro's government apparently went on to ban the film because, the leaked cable claims, it "knows the film is a myth and does not want to risk a popular backlash by showing to Cubans facilities that are clearly not available to the vast majority of them."

…according to the FSHP, the only way a Cuban can get access to the hospital is through a bribe or contacts inside the hospital administration. "Cubans are reportedly very resentful that the best hospital in Havana is 'off-limits' to them," the memo reveals.

…The memo points out that even the Cuban ruling elite leave Cuba when they need medical care. Fidel Castro, for example, brought in a Spanish doctor during his health crisis in 2006.