While our leaders discuss the fight against climate change in Cancún, hundreds of UK schools are shut down by global warming 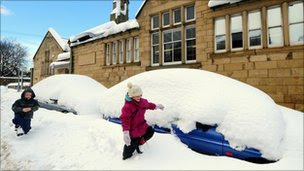 "The UK has been experiencing the earliest widespread snowfall since 1993 … One Rothbury resident describes it as the worst weather to hit the region in over 20 years [and the motoring organisation named the] AA said it was on course to have one of its busiest days in its 105-year history."

We're gettin' a little bit fed up with it now, you know, I mean it's taken me an hour and a half to dig myself into the shop this mornin'…

"The coldest place in the UK on Sunday night was Altnaharra in northern Scotland, which recorded a low of -16.1C (3F).

This is the worst I've ever seen it for time of year, without a shadow of a doubt. I was here in '63 and I remember 1963 and it wasn't anything as bad as this!

We must hope that world leaders in Cancún soon come up with a workable plan, because global warming has also been causing Scotland to struggle, with forecasters warning 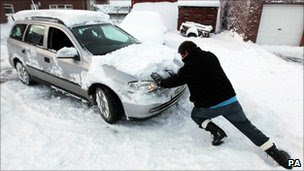 that the cold snap will get worse this week, with temperatures plunging as low as -20C.

The coldest overnight temperature in the UK was Altnaharra in northern Scotland, which recorded a low of -16.1C.

(Cheers to Instapundit for the link)

In Britain, thousands of schools were closed and police in the southern county of Surrey described conditions as the worst they had ever seen. …

Thick snow across Germany blocked roads, and caused flight cancellations and school closures. Bild newspaper said it was the coldest start to December for centuries, with some areas reporting temperatures as low as -18C.