Europe's left adrift in its inconsistency is how John Vinocur's IHT article reads in the paper version — perhaps bearing something of a mirror image to the leftists' American counterparts and perhaps bearing a(nother) lesson for Barack Obama's politics? 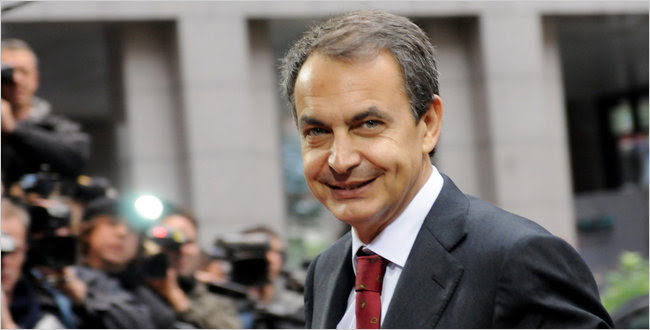 Spain’s Ministry of Equality is gone now, its rainbows packed away into the gray corridors of more earthbound politics. Mark that as a blow to utopians, but even more as a defeat for European social democracy.

In eliminating the ministry, and tucking its crusade for equal rights for women and gays into a subsidiary role in another department two weeks ago, José Luis Rodríguez Zapatero — the Spanish prime minister who’s easily the most recognizable figure among a handful of socialists still running countries in the European Union — was conceding a point and not contesting another:

The concession was that his old social democratic notions of what sounded progressive and forceful were basically not the stuff on voters’ minds during these days of profound economic insecurity.

And in juggling his cabinet and choosing hard, stability-oriented measures to keep Spain’s finances afloat, Mr. Zapatero (after regular socialism-solves-everything sound bites over six years in power) hardly seemed to challenge the idea that the European left has failed to come up with anything resembling a novel strategy to turn the economic switch back to full speed.

How do you confront low growth and, according to E.U. figures last week, a new increase in Europe-wide joblessness? Europe clearly does not say the middle-ground left has the answer.

… Policy Network, a center-left research organization that tracks the fortunes of European social democratic parties on a comparative basis, has found nothing to be encouraged about in its latest reading. Noting national election defeats this year in Britain, the Netherlands and Sweden, it wrote:

“There’s little sign that the center-left is regaining the confidence of the electorate, let alone presenting itself as a competent contender for power. If social democrats step back from their own national focus and look at the bigger picture, they will realize just how vulnerable and ideologically staid European social democracy as a political movement currently is.”

… Beyond acknowledging the reality of its decline, Europe’s left has dilemmas that it finds harder to discuss. … the middle-ground left to some voters has looked blindly irresponsible or traitorous to its welfare state ideology … Social democracy has also been particularly quiet about a re-nationalization of policy among some of its national parties and, with it, a corresponding loss of legitimacy for the idea that the left is the dominant source of solidarity among Europeans.

“Solidarity, the left’s ultimate rallying cry,” wrote Olaf Cramme, director of Policy Network, “is not in good shape at all.

…Perhaps hardest of all to acknowledge is that the social democrats have not come up with a confident response to growing resentment in Europe about its problems in integrating Muslim immigrants.