— Oh! I am so touched! It reminds me so much of the good ol' times under Saddam!

On the front page of Le Monde, Plantu creates moral equivalence between the Iraq of a bloodthirsty psychopath and the Iraq that was liberated by the Americans. 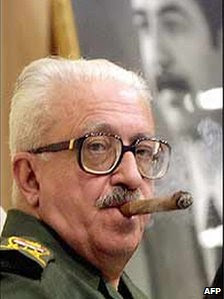 victims under the reign of Saddam Hussein had no recourse to a trial, being dispatched the same day their death was decided — usually in total secrecy — and no reporters or pundits, let alone anybody else, could criticize the courts and/or the government for their decision, whichever way it leaned.

And two months prior to his condemnation, incidentally, Saddam Hussein's former frontman denounced the Americans. For what reason?

He also criticised US President Barack Obama over the planned withdrawal of US troops, saying he was "leaving Iraq to the wolves". 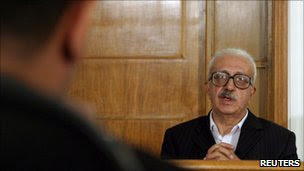 How rich is that?! A professional pacifist and the world's most famous do-gooder, aka the Apologizer-in-Chief, being condemned for pulling American soldiers out of Iraq, not by an American conservative but by a leader of Saddam Hussein's Ba'athist party.
Posted by Erik at 18:24