Is Michael Moore a racist? 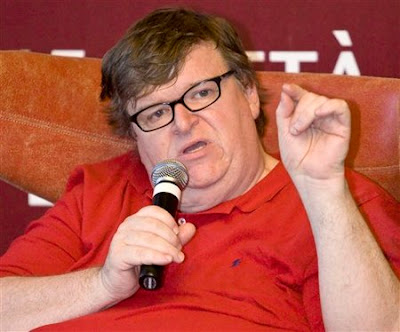 With the release of Michael Moore's latest fictonalised docu-drama, "Capitalism: A Love Story", the mind goes back to an earlier work of Mr. Moore, the book "Dude, Where's My Country?"

The reason for thinking back, the book in question was heralded at the time as:

"But his book is intended to serve as a handbook for how people with liberal opinions (which is most of America, Moore contends, whether they call themselves "liberals" or not) can take back their country from the conservative forces in power."

'So what' you say? Well, the client-media state in the US is all atwitter about the claimed (ie. false) underlying racial overtones to widespread dissatisfaction with the current US President Barack Obama. One of the phrases used by the teabaggers which has the client-state media up in arms claiming racism:

But I began to suspect that race was a factor for at least some critics when I heard them shouting about "the Constitution" and "taking our country back." Maybe Obama's health-care plan is an awful idea and his budget is way too big, but how exactly is any of this unconstitutional? Clearly, for some folks, there's a deeper rage at the man occupying the White House.