Chicken S**ts of the Sea 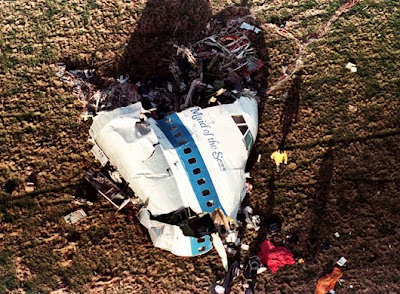 Perhaps it is a matter of being dense or just missing the memo, but all radar continue to be up as one British better parrots yet another British better regarding that oil-for-fools programme bubbling up out of the Scottish moors:

Today Straw was forced back into the debate after the Sunday Times claimed Megrahi had been "set free for oil" – a reference to BP's £500m exploratory agreement with the Libyan regime shortly after the PTA. Echoing Lord Mandelson's complaint that the charge was implausible and offensive, Straw called it an "absurd confection". What is not in dispute is that London had been keen to normalise relations with Tripoli after Gaddafi's renunciation of nuclear ambitions in 2003 and that Salmond had opposed including Megrahi in the 2007 PTA.

One notes that nobody in UK officialdom has actually categorically denied any involvement what-so-ever on the part of the UK government. This bit turns it up a notch even further:

Labour officials in Edinburgh, from where cross-border correspondence appears to have been leaked, poured scorn on the idea of any deal over Megrahi's release.

"How could Tony Blair or Gordon Brown offer a deal to Gaddafi which would depend on getting Alex Salmond to do something?" an official said.

Ahhh, the old answering a question with a question bit, a sure sign that subterfuge is afoot. Keep in mind, for better or worse there could be legitimate geo-strat reasons for releasing such a prisoner, as foul as the idea/deed actually is to most individuals. However, given the lack of comment, the lack of categorical denial and the subterfuge surrounding this situation, it is readily apparent that what lies at the heart of this matter is a truth which reeks of some short-term, small-minded oil-grubbing deal. If this is not the case, why is there no great statesman coming to the fore to explain the great matters of state involved?

If the story continues to have legs we may get to witness a personal favourite in the denial game, some washed out pol thundering that "these allegations are false!" The routine being an allegation of X, Y and Z happening on a Tuesday, when in reality X, Y and Z actually did occur, but on a Wednesday.

Then again, when it comes to our govermental betters ..... you know the routine.
Posted by Georges at 06:06