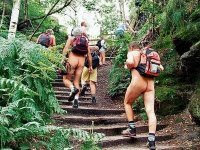 Amazing to see what gets people all hot and bothered. Confiscatory taxation, no. Ever growing governmentalism, no. Diminishment of civil liberties, no. Feckless leadership in government and/or commerce, no. Mindless labour unionism, no.

When the first nude walkers came over the border the tranquil, neutrality-loving Swiss tried to pretend it wasn't happening. It was only when it became clear that the invaders had a plan of conquest — even if they had no clothes — that the Alpenhorns sounded the alarm.

Now the Swiss authorities are trying to fend off hordes of German ramblers dressed in nothing more than a rucksack and walking boots. The influx appears to have been started after a German mountaineering website declared the Swiss wilderness a "paradise for naked ramblers".

Don't forget the bug spray.
Posted by Georges at 06:52