Michael R Gordon calls them "unexpected" or "unlikely" alliances. Note to the New York Times and other like-minded mainstream media (inside or outside the U.S.): The alliances are indeed unexpected and unlikely (and the twists surprising) if (and only if) you have been so busy listening to your own verbiage and hand-wringing for the past four years that, in the process, you have ignored the voices of the Iraqis (and of American service members) — the two populations who just happen to be most concerned by Bush's decision to intervene in Iraq.

Here is a portrait of Iraq's "insurgents" and "freedom fighters":

In a surprising twist, the jihadists — the Americans’ most ardent foes — made the new strategy possible. Al Qaeda in Mesopotamia, a predominantly Iraqi organization with a small but significant foreign component, severely overplayed its hand, spawning resentment by many residents and other insurgent groups.

…The fighters raised funds by kidnapping local Iraqis, found accommodations by evicting some residents from their homes and killed with abandon when anyone got in their way, residents say. A small group of bearded black-clad militants took down the Iraqi flag and raised the banner of their self-proclaimed Islamic State of Iraq.

“They used religion as a ploy to get in and exploit people’s passions,” said one member of the Kit Carson scouts, who gave his name as Haidar. “They were Iraqis and other Arabs from Syria, Afghanistan, Jordan, Saudi Arabia and Egypt. They started kicking people out of their houses and getting ransom from rich people. They would shoot people in front of their houses to scare the others.”

Or, as the know-all liberals keep telling us in dramatic tones: "You too would take up weapons, you too would act the same, if a foreign army invaded your country." Kick people out of their houses and get ransom from rich people? Shoot people in front of their houses to scare the others? The hell we would! Maybe your understanding of the entire situation over there is, uh, slightly simplistic! 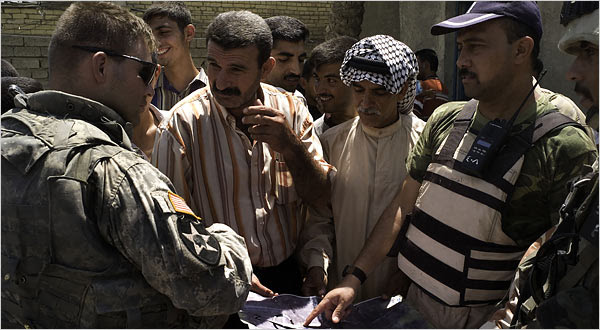