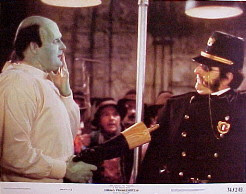 The front page of today's Washington Post fluffy and journalistically irresponsible Style section (above the fold) features a teenage transsexual online gamer who started a ‘guild’, and "Big Love", HBO's soap opera about nearly non-existent polygamy. Note to the authors – online, a sexual identity is largely meaningless unless your life is driven by talking about yourself.

To the leftist media, the interest at most, of 10 000 people in the country has to capture the attention of a population pf nearly 300 million people to the exclusion of their own lives.

The idea seems to be for those nearly 300 million people to see their own lives through someone else's prism.

Like the lack of attention and confusion generated by the unveiling of the sculpture of Churchill-in-a-straightjacket had or didn't have, the never-ending breaking of taboos and "awareness raising" stunts no longer have a frame of reference to have any enlightening effect.

Since nearly no-one cares they had to start working on the subconscious mind. It's the only party left that could be forced to listen to them.