And it comes with the leather bucket seat and onboard torture chamber options. 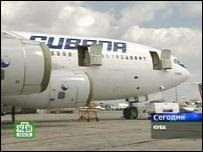 With a some bank from an old friend Castro a new Presidential Dictatorial jet has finally come through. Mercifully selected was the jet manufacturer with the worst crash record out there.

«But security is paramount too: the plane comes with armoured cockpit doors and a system for making bombs safe.»

Armored against WHO, I wonder. El Jefe himself, or it it just the CIA dementia drugs talking?

At the moment it's being used for the rendition of workers to and from Caracas who happen to be prisoners of a detention camp on the well managed island of Cuba – called Cuba.
Posted by Joe at 17:34