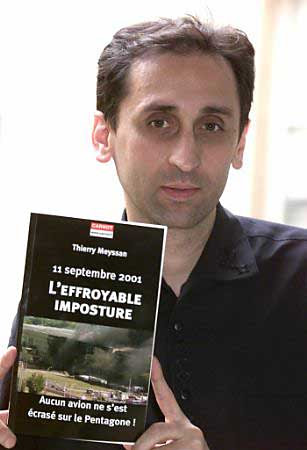 It’s bizarre enough that a 40 year authoritarian regime would continue to call itself a “revolution”, now we have a conspiracy minded French talking head with a limited intellect carrying their piss bucket simply because it feeds his anti-American instincts:

«Jean-Guy Allard, a journalist with Granma International, wrote a book about RSF's leader (El expediente Robert Ménard: Por qué Reporteros sin Fronteras se ensaña con Cuba, Quebec: Lanctôt, 2005) which lays out the pieces of the puzzle regarding Menard's activities, associations and sources of funding in an attempt to explain what he calls Menard's "obsession" with Cuba.»

Hey Meyssan, what about BURMA or the NorKs – they don’t care for the US – do you plan on repeating THEIR press releases?
He is referring to RSF (Repoters without borders) and accusing them of “counter revolutionary activity,” which includes not just smothering dissent, but censoring and silencing journalists in “El Hefe’s” Cuba.

«On April 27 this year the pieces began to come together: Thierry Meyssan, president of the Paris daily, Red Voltaire, published an article in which he claimed Menard had negotiated a contract with Otto Reich and the Center for a Free Cuba (CFC) in 2001. Reich was a trustee of the center, which receives the bulk of its funding from the U.S. Agency for International Development. The contract, according to Meyssan, was signed in 2002 around the time Reich was appointed Special Envoy to the Western Hemisphere for the Secretary of State. The initial payment for RSF's services was approximately 24,970 euros in 2002 ($25,000), which went up to 59,201 euros in 2003 ($50,000).»

He is aiding in the snuffing out of any criticism and honest discussion for a regime which has capped 10.000 political opponents between the eyes. Not very wise of Meyssan. The stars in his eyes are obvious, and obviously misguided. It’s a VERY old story, and you’re still on the wrong side of humanity. Even a book reviewer in the freebie rag “Citypaper” ten years ago was aware enough the old leftist fiction about the “gentleness of Communism:

«My mentor in college was a devoted Cuban apologist. She conceded that the Castro government had problems, but she knew where her loyalties lay. When I told her I had met Guillermo Cabrera Infante at the Telluride Film Festival, she seemed almost agitated, reminding me that rumors abounded that he had once worked for the CIA. He seemed nice enough to me, I said, shrugging this off. When I mentioned him to another fellow leftish film person, she too recognized the name. "He's a gusano ," she said. This, apparently, is the Spanish word for worm, which is what pro-Castro types dubbed those who fled the island in the revolution's wake.

The fact is that Infante makes left-wing types really nervous. He started out as a journalist in the Batista days, and after his writing was banned he turned to publishing under the name "G. Cain." When Castro seized power he was named editor of Lunes , the literary supplement to the newspaper Revolucion, the voice of Cuban revolution. But when the film P.M., a "Havana by night" documentary, was denied an exhibition license by the government-sponsored film institute Infante had helped to form, Lunes led a movement to protest. The end result was that the seized film print was returned, but both P.M. and Lunes were banned. Infante, after accepting a post as cultural attache to the Cuban embassy in Belgium, eventually fell completely from favor in the Castro regime and fled to London, where he resides today.»

Talk show-boy needs to look carefully at who he's propping up, and who his friends are after.
One year after the 9-11 attacks one blogger writes of Meyssan, pointing out the obvious problem with tinfoil-hat conspiracy theories and asks the obvious questions:

«In short [to Meyssan], September 11th was a US conspiracy.
Now I’m mostly curious. Why is this guy still alive?

If he’s right, the weight of the US government should have fallen on him before he even got the pile of merde to his publisher. Since the French government and cops were absolutely cooperative during the post-9/11 investigation, they obviously would not have stopped it or even got in the way.»