MLK on Genuine Leaders, Going It Alone, and Risking Ostracism 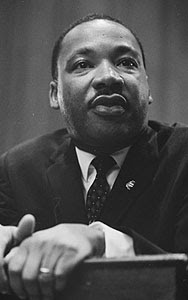 
A man can't ride your back unless it's bent.


A man who won't die for something is not fit to live.


At the center of non-violence stands the principle of love.


A right delayed is a right denied.


A riot is at bottom the language of the unheard.


A genuine leader is not a searcher for consensus but a molder of consensus.


All labor that uplifts humanity has dignity and importance and should be undertaken with painstaking excellence.


All progress is precarious, and the solution of one problem brings us face to face with another problem.

The following three quotes come to mind when meditating on George W Bush's refusal to "respect" international rules and to abide by what the so-called "peace camp" calls international law, the administration's taking action alone (well, with "only" some 30 allies or so), and America's subsequent ostracism in the international arena.

An individual who breaks a law that conscience tells him is unjust, and who willingly accepts the penalty of imprisonment in order to arouse the conscience of the community over its injustice, is in reality expressing the highest respect for the law.


Almost always, the creative dedicated minority has made the world better.


A nation or civilization that continues to produce soft-minded men purchases its own spiritual death on the installment plan.