Where colleges are not just indifferent to diversity, but downright allergic to it

… Academia is simultaneously both the part of America that is most obsessed with diversity, and the least diverse part of the country. On the one hand, colleges bend over backwards to hire minority professors and recruit minority students, aided by an ever-burgeoning bureaucracy of “diversity officers”. Yet, when it comes to politics, they are not just indifferent to diversity, but downright allergic to it. 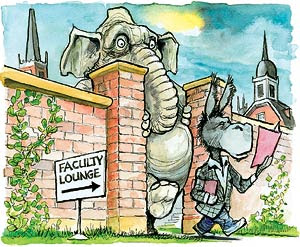 … a new national survey of more than 1,000 academics by Daniel Klein, of Santa Clara University, shows that Democrats outnumber Republicans by at least seven to one in the humanities and social sciences. And things are likely to get less balanced …


“So what”, you might say, particularly if you happen to be an American liberal academic. Yet the current situation makes a mockery of the very legal opinion that underpins the diversity fad. In 1978, Justice Lewis Powell argued that diversity is vital to a university's educational mission, to promote the atmosphere of “speculation, experiment and creation” that is essential to their identities. The more diverse the body, the more robust the exchange of ideas. Why apply that argument so rigorously to, say, sexual orientation, where you have campus groups that proudly call themselves GLBTQ (gay, lesbian, bisexual, transgendered and questioning), but ignore it when it comes to political beliefs?


This is profoundly unhealthy per se. Debating chambers are becoming echo chambers. Students hear only one side of the story on everything from abortion (good) to the rise of the West (bad). It is notable that the surveys show far more conservatives in the more rigorous disciplines such as economics than in the vaguer 1960s “ologies”. Yet, as George Will pointed out in the Washington Post this week, this monotheism is also limiting universities' ability to influence the wider intellectual culture. …


Bias in universities is hard to correct because it is usually not overt: it has to do with prejudice about which topics are worth studying and what values are worth holding. Stephen Balch, the president of the conservative National Association of Scholars, argues that university faculties suffer from the same political problems as the “small republics” described in Federalist 10: a motivated majority within the faculty finds it easy to monopolise decision-making and squeeze out minorities.


… As for the university establishment, leftists are hardly likely to relinquish their grip on one of the few bits of America where they remain in the ascendant. And that is a tragedy not just for America's universities but also for liberal thought.


In other comments gleaned from the Ashbrook Center:


Quoting Robert Kaplan's The Media and Medievalism, Belmont Club's The Absence of Evidence says that the most powerful tool of totalitarianism is to don the guise of righteousness and assume "the right to question and to demand answers, the right to judge and condemn, and the right to pardon and show mercy." It is in the end an attempt to usurp the wellsprings of legitimacy. (Why is it that one might think of the International Criminal Court when reading about those "rights"?)

After the Berlin Wall fell, I reread [the list of ingredients necessary for oppression] and noticed that some of [Nobel laureate Elias] Canetti’s six ingredients were also tools of legitimate regimes seeking to keep the anarchy of the mob at bay. Yet to read Crowds and Power now, at a time when truly noxious authoritarian regimes exist in fewer and fewer places, is to be chilled by another realization.