The Economist's article: France struggles to make sense of a challenging world 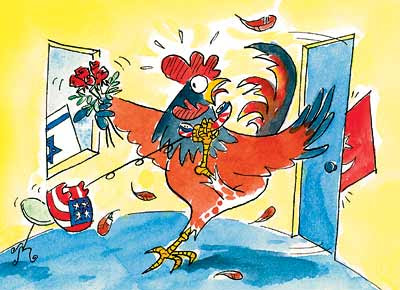 [In Israel] France is not seen as an honest broker, and is therefore disregarded. These are testing times for France's foreign policy, and not just in the Middle East. In some ways, the French have grounds for satisfaction. President Jacques Chirac's government feels vindicated over the war in Iraq. …


Whereas only 36% of the French approve of [Chirac] generally, fully 76% like his foreign policy. If anything, French opinion on Iraq is more uniform than ever. One by one, the voices who backed the invasion have begun to retreat. … The absence of debate—in newspapers, conferences, or diplomatic circles—is striking.


All the same, French diplomacy is under strain, in three main areas. The first is its inability to secure the release of two French journalists taken hostage in Iraq in late August. … This failure has not only shaken France. It has also prompted questions about the value of the country's traditionally pro-Arab stance. “The failure of French diplomacy” over the hostages, wrote Ivan Rioufol, in Le Figaro, “shows the limits of a pro-Arab policy that is too empathetic, indulgent, manipulable.” France is beginning to recognise that, if it is to count in the Middle East, it cannot shuttle only between Ramallah and Damascus.


The second source of unease is the prospect of Turkey's entry into the European Union, which has provoked fierce hostility in France. … Above all, there is a fear that the French vision of a politically integrated, socially minded Europe is being swept away by an Anglo-Saxon model of loosely linked countries in a liberal market, dominated by English. This is why Laurent Fabius, a former Socialist prime minister, has called for his party to reject the draft EU constitution in next year's referendum. Where once Europe comforted France, it is increasingly seen as a threat. “Europe has been a way to project ourselves, to control our destiny,” comments one French diplomat. “Now, it's become something we cannot control, and that is uncomfortable.”


The third source of concern is relations with America, battered over Iraq. It is no secret that the French are hoping for a victory by John Kerry, though they are careful not to tarnish him with any public endorsement. Polls show that some 72% of the French want him to win. Given today's lack of trust between France and America, a Kerry victory would certainly improve the tone. Yet it is still out of the question for France to send soldiers to Iraq. Even under a President Kerry? “Never,” replies Mr Barnier firmly. To avoid any such disappointment chilling future relations, the French have been trying to puncture hopes in the Kerry camp. Better relations with America, stresses Mr Barnier, should not depend on being in agreement. “Alliance,” he says, “but not allegiance.”

Except, of course, the French never use these high-falutin' words with any other country or group of countries, do they? (In fact, they would very much like the Eastern Europeans to pay allegiance to France.)


The Economist's editorial: How France could improve its foreign policy 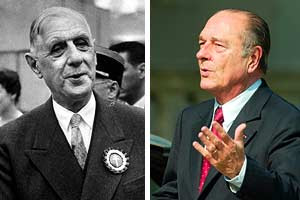 IT IS easy from afar to caricature France's foreign policy. The country's pretensions to exert significant global influence are overblown. Its forays into the Middle East, Asia and Africa often seem designed to promote not a worthy alternative view of the world but its own commercial interests, especially defence sales, spiced with a nostalgia for la Francophonie. And too much Gaullist bluster, most recently on Iraq, appears to be motivated by the desire to upset and undermine the United States, still France's most important ally.


Caricatures usually have some basis in truth—and these ones are no exception. Yet the real story of French foreign policy is more complicated than this implies … Yet, even conceding that point, it remains unhelpful that France so often resorts to a knee-jerk anti-American stance in its foreign policy. Its dispute with America over how to deal with Iraq may have been genuine; and it is understandable that the French, having opposed the start of the war, do not see it as their job to help finish it. Yet France gains nothing from further fighting and greater instability in that country. Even if the French government sticks to its insistence on never, in any circumstances, sending troops there, it could be more supportive…


The other way in which France could improve its foreign policy is to subsume it more often within a wider Europe's. The French, like the British, have tended to see Europe's common foreign policy only as a vehicle which can put more oomph behind policies that reflect their national interests. To put it in Gaullist terms, Europe works solely when it is France writ large. But in an EU of 25, soon to be 27 or more, this is unlikely to be a fruitful approach. The French have, for example, damaged their effectiveness by dealing condescendingly with the new EU countries from central Europe. They have woken up late to the fact that they and the Germans can no longer run the show. Instead France, again like Britain, should be doing more to build alliances around an expanded Europe.


This is not to suggest that a wider Europe, any more than France alone, should deliberately pursue a foreign policy at odds with America's. The EU may have a different emphasis when it comes to handling neighbours, such as the Balkans or Russia, or regions with which its members have special links, such as Africa, but its strategic concerns will be similar. Indeed, a stronger Europe, better able to deal with conflicts and problems in such countries, ought to be in America's interests. But to be a counterweight would be counterproductive.