A War That Too Few Yanks Died In

You've heard about how too many people — too many Americans as well as Iraqis — have died because of the American short-sightedness, American duplicity, and American greed (or those of the Americans' leaders) in and over Iraq. If the Yanks are losing so many men, it's due to their own (or their leaders') incompetence and their inability to see the value of peace, wisdom, humanity, tolerance, and rational and lucid thinking, as well as the willingness to negotiate and compromise. And the reason so many Iraqis are dying is also linked to the Yankees' propensity for violence and irrational love of war. Right?


Well, it turns out that there's a new "theory" out: this one concerns too few Americans dying! Too few Americans dying in World War II! That's the new self-serving "opinion" coming from "the peace camp" (mainly Germany, so far, but we can expect this "lucid" viewpoint to spread to other "peace camp" countries soon). As Tyranno testifies on David's Medienkritik, "A growing conversation I hear more and more often about how the 'Soviets really won the war' because they lost more men."


Actually, this "rewriting of history" really isn't that new. It's not really about too many or too few Americans dying, or whatever, and it's not about one people's irrational thinking or their attraction to violence and war, either. It's always, always, always, about handing America the "you can't win" card: "Heads I win, tails you lose", goes the Europeans' self-serving opinions, so that, in every case, they can look down their noses at those hopeless and hapless Yanks.


That said, let's just take a minute to examine the veracity and topicality of the "the Soviets really won the war" charge/opinion/viewpoint. As often is the case, the best way to verify the topicality of a point of view is to examine how other people — and not just any individuals, those who are primarily concerned — feel about it.


It works not too badly with the Iraqis, most of whom skewer the "too-many-people-have-died-in-Iraq-and-now-all-hell-is-loose-what-a-tragedy-it-is" viewpoint. Let's see how the Poles react to the Germans' "The Soviets made the greatest sacrifices" opinion. Richard Bernstein's article concerns the 60th anniversary of the Warsaw Uprising. 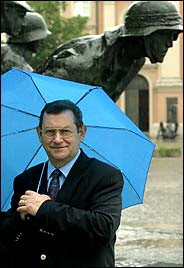 "The Soviet soldiers were there," Professor [Norman] Davies said, pointing to a tree-lined bank on the far side of the [Vistula] river, "and the Germans were here," he continued, indicating the near bank where bicyclists meandered peacefully through what is now a public park.


"They didn't fire at each other," he said, a touch of retrospective amazement in his voice. "But if any Soviet soldiers tried to cross the river to help the Poles, both sides fired at him."


There is a chilling mournfulness to the image the account conjures up — Russian soldiers literally sunbathing on one side of the Vistula while the Germans literally obliterated Warsaw street by street on the other.


...Stalin's refusal to come to Poland's aid made the uprising a sort of official nonevent during the decades of Soviet domination in Poland, but it is to be celebrated in a major way on this anniversary…

Now, some readers may wonder about the expression "rewriting of history": "Surely, the Soviets did lose 20 million people during World War II, and who are you to sneer at that?!" Well, obviously I do not wish to totally undermine the true sacrifices undertaken by the Red Army and Soviet civilians. And anybody who would downplay the role of the Red Army in winning the war would be a fool. But still, a few comments need to be made.


Here's the clincher of this posting: the people who leap to the defense of, and laud, the USSR's actions during WWII are the same who are always ready to castigate America and mock Americans' bravery, losses, sacrifices, and martial reasoning and war plans, while ridiculing anybody, American or other, who seems to accept Washington's claims at face value.


There's an expression for this: it's called double standards. Of the self-serving kind.

PS: Again, I do not want to minimize the Red Army's role in winning World War II. (On the contrary, I believe that if Stalinist politics had not been involved, the Soviet juggernaut might have been even more effective.) But this blog — and this posting — is not primarily about the Soviets or World War II or the past. It is about today's European mindset, and how their attitudes, no matter what the subject, will always turn to a viewpoint that portrays the Americans as clowns, villains, hypocrites, or worse.

Double standards. Of the self-serving kind.