God, Slavery, and Freedom: Is the Bible—powerfully—relevant to today’s issues? (Highly Recommended) 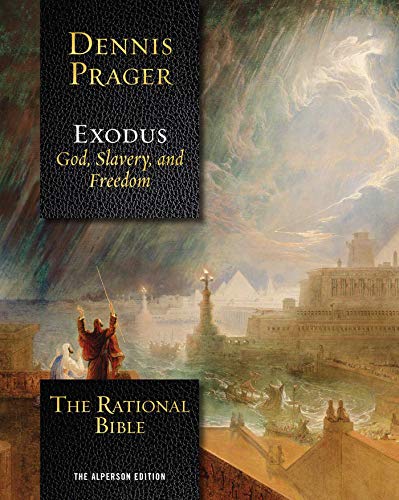 As someone who was never particularly religious, I have been amazed to discover the first books in Dennis Prager's Rational Bible series. The subtitle of Prager's Exodus is God, Slavery, and Freedom.

Why do so many people think the Bible, the most influential book in world history, is outdated? Why do our friends and neighbors – and sometimes we ourselves – dismiss the Bible as irrelevant, irrational, immoral, or all of these things? This explanation of the Book of Exodus, the second book of the Bible, will demonstrate that the Bible is not only powerfully relevant to today’s issues, but completely consistent with rational thought.

Do you think the Bible permitted the trans-Atlantic slave trade? You won’t after reading this book.

Do you struggle to love your parents? If you do, you need this book.

Do you doubt the existence of God because belief in God is “irrational?” This book will give you reason after reason to rethink your doubts.

The title of this commentary is, “The Rational Bible” because its approach is entirely reason-based. The reader is never asked to accept anything on faith alone. As Prager says, “If something I write does not make rational sense, I have not done my job.”

The Rational Bible is the fruit of Dennis Prager’s forty years of teaching the Bible to people of every faith, and no faith. On virtually every page, you will discover how the text relates to the contemporary world and to your life.

Besides a free sample from Amazon, you can purchase a copy of Dennis's The Ten Commandments: Still the Best Moral Code. Alternatively, or in addition, you can head over to Prager University's free video commentaries on each of the Ten Commandments — 1 to 5 and 6 to 10 — with six minutes or less per Commandment.

By September, the first three books of Dennis Prager's Rational Bible series will have been published: Genesis, Exodus, and Deuteronomy…

With regards to the significance of the Hebrews' exodus from Egypt, Bookworm treats us to his or her annual Passover post:

For roughly 3,500 years, Jews have been telling and retelling the story of Passover — which is also the story of the world’s first revolt against a totalitarian dictatorship …

… the thing to remember is that those atop the tyranny pyramid care about only one thing, which is that their tyranny remains stable and protected

… I was re-reading Dennis Prager’s superb The Rational Bible: Exodus and was reminded that each one of the plagues essentially attacked one of the Egyptian’s many gods. Only in this way could God demonstrate that they were false idols and that he had the power to control the symbols with which they were associated.

… There is … a much more profound purpose behind the ten plagues, and that is to remind us of the tyrant’s capacity for tolerating others’ suffering, as long as his power remains in place.

What Pharaoh discovered with the first nine plagues is that life can go on, at least for the ruler, no matter the burdens he places upon his people. A blood-filled Nile River may, at first, seem appalling, but the red recedes and life goes on. Pharaoh still holds power. The same is true for each subsequent plague, whether lice, boils, frogs, darkness, or anything else. As long as Pharaoh realizes, after the first panic, that he is still powerful, he will always reconcile himself to his people’s incremental destruction.

Sheltered in his lavish palace, Pharaoh might have a theoretical concern that a starving and frightened populace could turn on him. However, provided that he is assured that his people will continue to fear and worship him, their suffering is irrelevant. It is only when the price becomes too high — when the plague struck Pharaoh in his own palace, killing his firstborn — that Pharaoh is convinced, even temporarily, to alter his evil ways.

Human nature hasn’t changed in 3,500 years. Think, for example, of both the Nazis and the Japanese at the end of WWII. … Hitler and his commanders were Pharaoh. Only when they, personally, faced a humiliating death would they stop fighting.

The same held true for the Japanese. … The Japanese high command was Pharaoh. No amount of smaller plagues could stop the command from its chosen path. Only a large plague would swiftly lead to the inevitable conclusion.

The only way to destroy an evil institution is to decapitate it. That’s what God did with the 10th plague. That’s what Truman did when he dropped atom bombs on Japan. That’s what the Allies did when they engaged in total war against the Nazis. In each case, the only way to end a tyrant’s rampage of murder, torture, and enslavement was directly hurting the tyrant’s person.

Those who prefer the stability of tyranny to the risks of freedom are the same people who refuse to accept that, under tyranny, the innocents are always going to die, with the only question being whether they will die quickly or slowly. That’s the problem with an evil regime. If you’re unlucky enough to live under that regime, you’re going to end as cannon fodder.

Pharaoh will let you die of plagues, and the Nazi and Japanese leadership will let you be bombed and burned, and Biden will open America’s southern border while ramping up the welfare system and pushing Critical Race Theory, a pernicious racial theory every bit as bad as the Nazi’s racial theories. Ensconced in the White House, and surrounded by unelected fanatics, nothing will stop them. The American economy can collapse and whites can become the subjects of actual purges and the Biden administration will continue on its path — as long as the tyrants in charge can retain their power.

People of goodwill must sometimes recognize that the generation raised under tyranny is a lost generation that cannot be saved, whether because it will die under the tyrant’s lash, in the tyrant’s war, or in a war against the tyrant. Sometimes, when slaves finally taste freedom, they fear it. The Bible recognizes this problem, banning the Promised Land to those who were slaves in Egypt. They were a lost generation.

For this reason, when one sees a people groaning under tyranny the most humane thing to do is to destroy the tyranny quickly and decisively even if that process causes people to suffer. Most of them were always going to be lost. Our actions are for the benefit of subsequent generations and, if we are lucky, for those who survived both the tyranny and the liberation.

Protecting freedom for the greatest number of people sometimes demands proactive behavior. And there is nothing more proactive than an overwhelming response when a tyrant starts putting out feelers to see how far he can go. …

… The only way to stop tyranny is to fight tyranny. For liberty-loving people in America, that’s a challenge, because, for the first time in my lifetime, the tyrant is their unfettered government. Still, we have weapons. For one thing, every last one of us needs to stop bowing down before cancel culture. Even non-conservatives need to realize that there is no end to cancel culture. Its practitioners must constantly strive to prove their purity and they can do this only by attacking others.

… We have to stop playing this fear game. When they call us racists, when they subject us to the appalling racist Critical Race Theory, when they use race to justify overthrowing our southern border, we need to speak out even more loudly. We need to fight their ideology at every turn. We need to boycott the woke companies. We need to fund organizations that will handle lawfare for people fired because they exercised their constitutional rights.