How Fake News Has Misrepresented the Yellow Vest Revolt in France 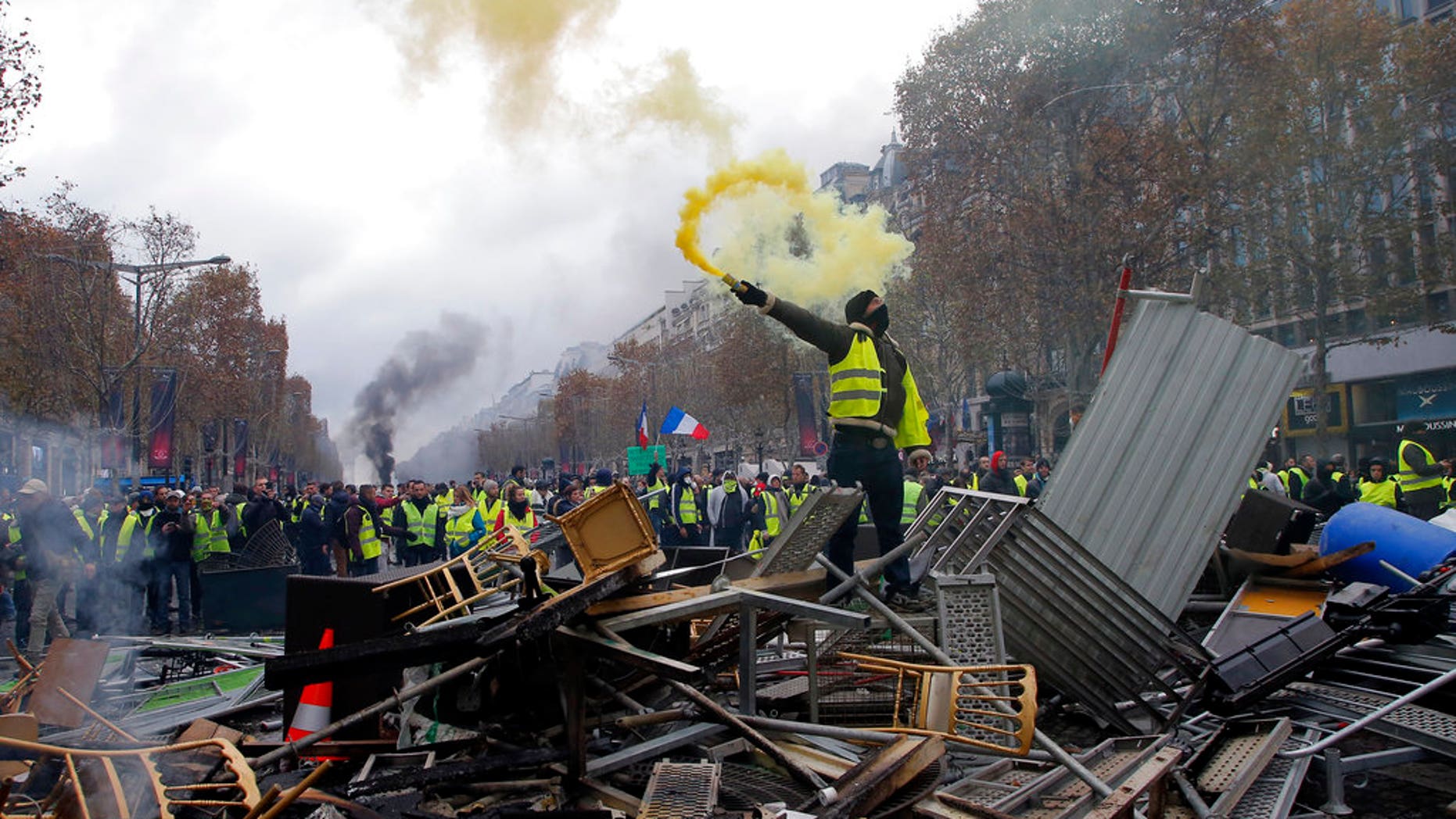 Demonstrating with the Yellow Jackets on the Champs Élysées against la répression du gouvernement. It was quite festive in the beginning; but cats are not partial to tear gas, so when the tear gas grenades started raining around us, the bicycle cats said Enough and we pedaled home. 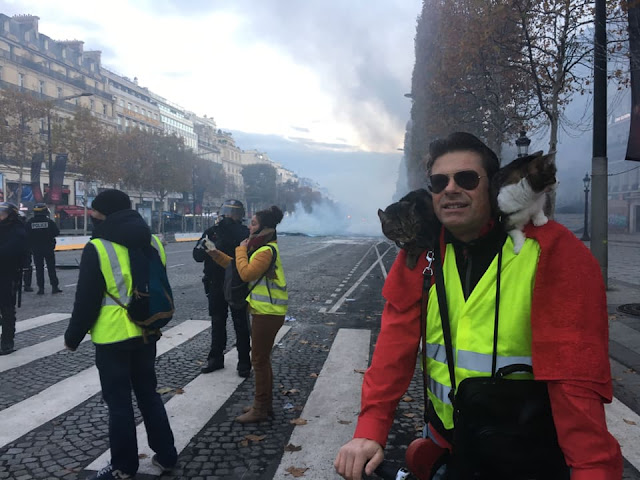 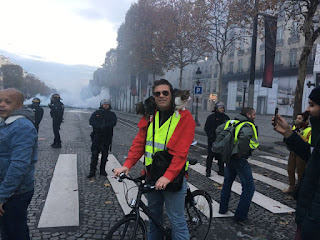 
NOTE: This post will be fully updated, greatly expanded, and, in the process, thoroughly rewritten for an article in the January 2019 issue of the New English Review entitled THE TRUTH ABOUT FRANCE'S YELLOW VESTS.

It has (usually) not been deliberate, I gather, and nobody has said anything factually wrong; what is the problem is the fact that crucial information has been omitted. (Update: merci au Professeur Glenn Reynolds, à Monsieur Pierre le Tech Mec, et à Monsieur Francis Turner.)

In fact, the imposition of ever harsher rules has been going on for the past decade and a half or so — whether the government was on the right or on the left — and that is why the choice of les gilets jaunes (the yellow jackets) by the demonstrators is particularly ironic.

The 2008 law (under the presidency of Nicolas Sarkozy) requiring the presence of high-visibility vests (gilets de haute visibilité) aka security vests (gilets de sécurité) in every vehicle — hardly an unreasonable rule, for sure, as similar ones exist throughout the continent — was just another example of the myriad of evermore-onerous directives for car and motorcycle owners over the past 15 years, and so the government in effect provided the 2018 rebels with their uniforms.

What has been most irksome for les Français since the turn of the century has been the ubiquitous radars, which, like red-light cameras in the United States, are accused of having (far) more to do with bringing revenue to the state than with road safety.

And just like the arms industry in the Soviet Union, if there is one area of France where the technology was/is always moving forward, it is the radar sector.

Call it the radar-industrial complex.

Over the years, the radars have become evermore stealthy and insidious. For instance, radars have gone from contraptions being able to photograph a single car on only one side on the road, in the lane closest to the machine (with a burst of white flash quite jolting to the driver at nighttime), to taking multiple pictures over the entire roadway simultaneously of several vehicles driving in both directions.

The first radars were installed in 2003 under President Jacques Chirac and his interior minister, Nicolas Sarkozy, and in the beginning, drivers were always warned by a road sign when a radar could be expected ahead (which brought about exactly what allegedly was the desired goal, to get cars to slow down).

What has happened since shows the Deep State at work in Europe just as much as, if not more than, in North America — and this leftist statism is the kind of news that has been ignored by the mainstream media, in France itself as much as abroad.

Eventually — in spite of the insistent promises of then-interior minister Sarkozy — new radars were installed without road signs announcing their presence.

The schemes to make the rules harsher have at times been so far-fetched and outrageous that push-back was inevitable and led to their demise. For instance, the attempt to require all vehicles in the nation to be equipped with a breathalyzer. (Not surprisingly, it emerged that a breathalyzer manufacturer who, naturally, was a close friend of a number of politicians, was behind the bill.)

Recently came the news of mobile radars, as mentioned above, meaning unmarked cars loaded with a radar-installed contraption driven by gendarmes dressed in civilian clothes. (Everywhere, young boys daydream of wearing a shiny uniform and going into action to fight crime; imagine, then, a policeman being asked to remove his uniform and put on his plainclothes to do nothing but passively drive up and down the road or highway in an unmarked car and let the hidden radar do its work, i.e., making him trick his (otherwise honest) fellow citizens who have done nothing but "violate" a rather arbitrary administrative rule, a "speed" (sic) limit that has barely changed, if at all, in almost 50 years).

Meanwhile, crony capitalism has given rise to a side economy, a side economy whose only purpose revolves around the punishment of citizens with cars or motorcycles — not least with blossoming (and very expensive) driving schools for drivers to recoup at least some of the points they have lost on their driver's licenses (again, for violations of a rather arbitrary malum prohibitum rule). If and when they are down to 0 points, they are barred from returning to the schools and they lose the license itself, for a year or more — the licenses of some two million Frenchmen are currently suspended — which leads in turn to job losses for some 80,000 drivers every year, since they can no longer commute.

• Finally, with the announcement of the gas prise rise, the French said "Enough is enough." And that was when the entire nation seemed to get together via the internet to mount the Yellow Vest revolt. 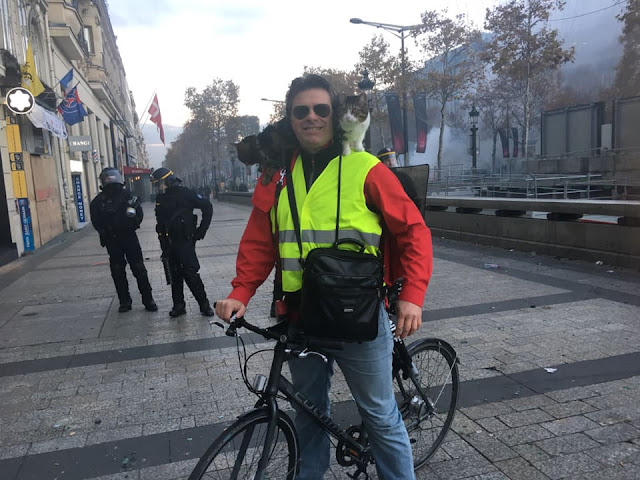 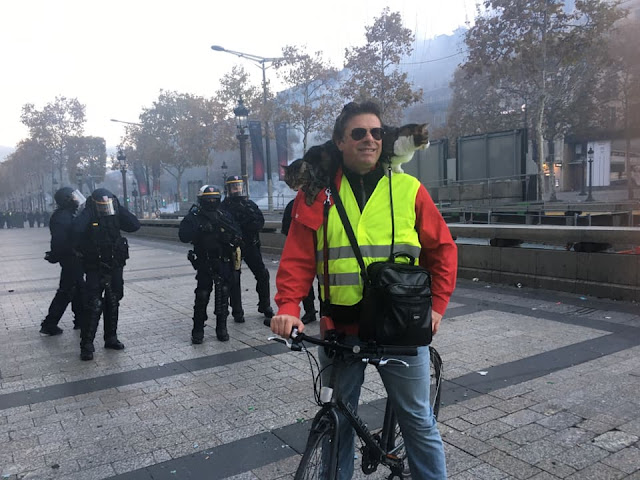 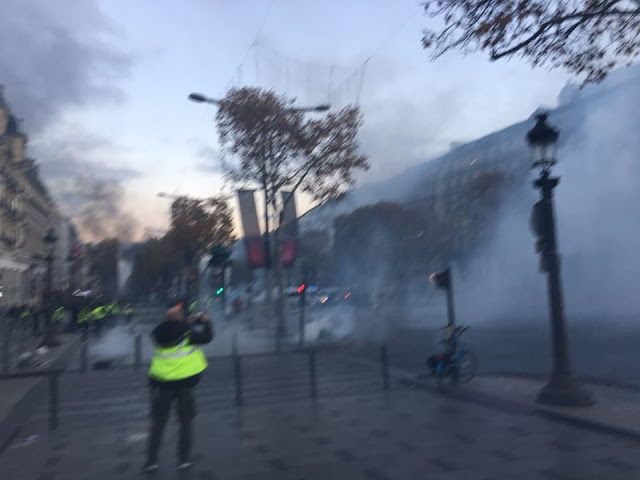 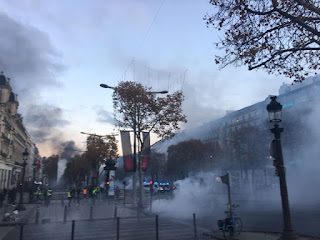 Awesome writing, thanks for the update Eric. You are the real news.

Thank you, a friend in California.