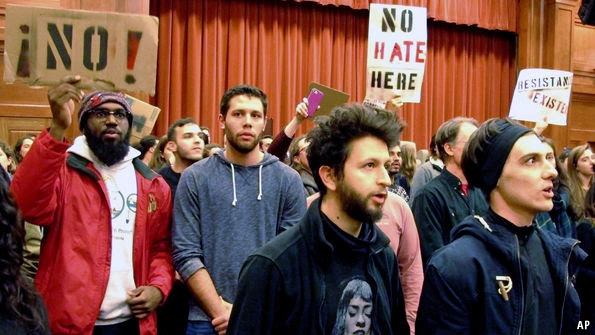 Free speech, once a central value of liberalism, has been claimed by conservatives


Charles Murray … was left to worry about academic freedom and to note that many of his assailants resembled figures from “a film of brownshirt rallies”. Middlebury’s agitators might ask themselves how a man whose work they decry as racist acquired the right to compare them to fascists. Students everywhere should wonder how free speech, a central liberal value, is instead becoming the banner of conservatives.

This prompting the Conservative Political Action Conference (CPAC) to be mentioned in a subsequent issue of The London weekly:

At the Conservative Political Action Conference in 2013, Charles Murray recommended, to the disappointment of his conservative colleagues, that Republicans should accept the legalisation of gay marriage and abortion. Charges of racism regarding his book, “The Bell Curve”, are still a matter of debate. Undaunted by these facts, students at Mr Murray’s lecture at Middlebury College harangued him by accusing him of being homophobic and sexist as well as racist (“Blue on blue”, March 11th). No need to bother with specifics when a stereotype is handy. It is an article of liberal faith that racism, sexism and homophobia are comorbidities. That is all the impassioned objectors need to know.