Waiting 3 to 4 Years for Surgery: The UK's State "Rationing Will Cripple Patients" 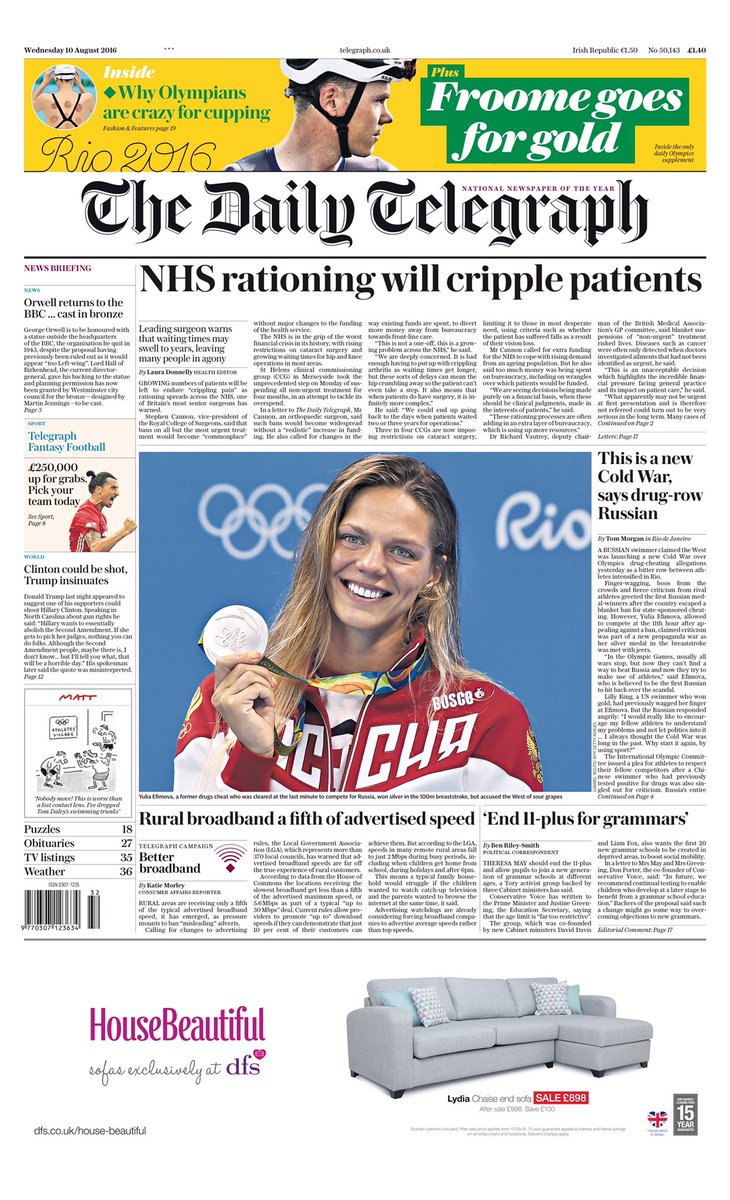 Leading surgeon warns that waiting times [in the UK] may swell to years, leaving many people in agony

summarizes Laura Donnelly about the main story on The Daily Telegraph's front page, which, with a tongue in cheek, could be called Bravely Taking Health Care Towards a Glorious Future in the Path of Venezuela.


Growing numbers of patients will be left to endure "crippling pain" as rationing spreads across the [National Health Service], one of Britain's most senior surgeons has warned.

Stephen Cannon, vice-president of the Royal College of Surgeons, said that bans on all but the most urgent treatment would become "commonplace" without major changes to the funding of the health service.

The NHS is in the grip of the worst financial crisis of its history, with rising restrictions on cataract surgery and growing waiting times for hip and knee operations in most areas.

St Helens clinical commissioning group (CCG) in Merseyside took the unprecedented step on Monday of suspending all non-urgent treatment for four months, in an attempt to tackle overspend.

… Mr Cannon, an orthopaedic surgeon, said such bans would become widespread without a "realistic" increase in funding.  He also called for changes in the way existing funds are spent, to divert more money away from bureaucracy towards front-line care.


"This is not a one-off, this is a growing problem across the NHS," [Stephen Cannon] said.

"We are deeply concerned, it is bad enough having to put up with crippling arthritis as waiting times get longer, but these sorts of delays can mean the hip crumbling away so the patient can't even take a step. It also means that when patients do have surgery, it is infinitely more complex."

He said: "We could end up going back to the days when patients waited three or four years for operations."


Three in four CCGs are now imposing restrictions on cataract surgery, limiting it to those in most desperate need, using criteria such as whether the patient has suffered falls as a result of their vision loss.

Mr Cannon … said too much money was being spent on bureaucracy, including on wrangles over which patients would be funded.


"We are seeing decisions being made purely on a financial basis, when these should be clinical judgments, made in the interest of patients," he said.

"These rationing processes are often adding in an extra layer of bureaucracy, which is using up more resources."

Dr Richard Vautrey, deputy chairman of the British Medical Association's GP committee, said blanket suspensions of "non-urgent" treatment risked lives.  Diseases such as cancer were often only detected when doctors investigated ailments that had not been identified as urgent, he said.

But as we can see, the good thing about all the above is that it leads to drama and to crises, which is of course what, in this era of the drama queen, keep the said drama queens alive, and (constantly) at the front of the scene, in the first place, as call multiply for more intervention from said drama queens, and their bureaucrats.

Addendum: In another article, The Daily Telegraph reports British hospitals as saying the NHS needs to “take a reality check” and limit what it funds, in view of the fact that almost 10% of patients who go to the emergency are seen after four (!) hours (an NHS goal was for 95% of emergency patients to be seen within four hours).


"We need a systematic and planned approach to this and we need to build a national consensus about what the priorities are,” he said.

“We can no longer do everything with the money that we have. We have to look at all the options – whether it’s restricting access to some treatments, changing the [waiting] targets, reducing the workforce, letting the deficits slide or deciding that we can no longer keep an Accident & Emergency department open, or that we can’t run two hospitals 20 miles away from each other,” he said.

The senior figure said most hospital chief executives opposed NHS charges for treatment, but many felt that greater rationing of free treatment was required, to prioritise the most essential care.

The data from NHS England shows a near doubling in the numbers of elderly patients stuck in hospital, for want of care at home, or help to get them discharged, in the past five years.

Overall, 115,425 bed days were lost to delayed discharges in June – almost 80 per cent more than the same month five years ago.

Just 90.5 per cent of patients who went to Accident & Emergency departments were seen within four hours, against a target of 95 per cent – the worst June figures on record.

Ambulance response times were also a record low for the time of year, with just 69.2 per cent of the most urgent calls receiving a response within eight minutes, against a target of 75 per cent.

Charities said a funding crisis in social care meant thousands of vulnerable people were being left in hospital, when they should have been cared for in their homes.

Update: cheers to Harrison for pointing out a recurring typo (now fixed)…
Posted by Erik at 09:39