The statistics behind gun violence: Mass shootings in the U.S. have fallen so much in the past century that the political left has had to redefine what a mass shooting is 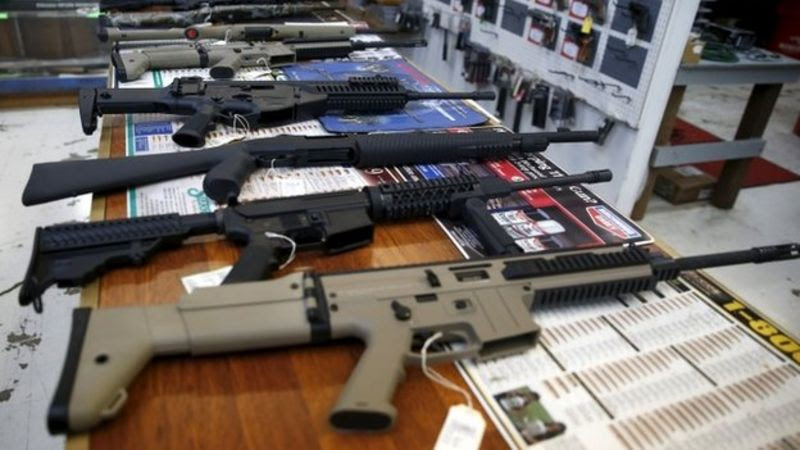 The BBC brings us the statistics related to gun violence. Check them out, and as you will see below, I and Erick Erickson will put these into perspective:

Guns in the US:

The statistics behind the violence

Mass shootings: There were 372 mass shootings in the US in 2015, killing 475 people and wounding 1,870, according to the Mass Shooting Tracker, which catalogues such incidents. A mass shooting is defined as a single shooting incident which kills or injures four or more people, including the assailant.

School shootings: There were 64 school shootings in 2015, according to a dedicated campaign group set up in the wake of the Sandy Hook elementary school massacre in Connecticut in 2012. Those figures include occasions when a gun was fired but no-one was hurt.

All shootings: Some 13,286 people were killed in the US by firearms in 2015, according to the Gun Violence Archive, and 26,819 people were injured [those figures exclude suicide]. Those figures are likely to rise by several hundred, once incidents in the final week of the year are counted.

The home front: So many people die annually from gunfire in the US that the death toll between 1968 and 2011 eclipses all wars ever fought by the country. According to research by Politifact, there were about 1.4 million firearm deaths in that period, compared with 1.2 million US deaths in every conflict from the War of Independence to Iraq.

Total number of guns: No official figure exists but there are thought to be about 300 million in the US, held by about a third of the population. That is nearly enough guns for every man, woman and child in the country.

The NRA: The right to own guns is regarded by many as enshrined in the Second Amendment to the US Constitution, and fiercely defended by lobby groups such as the National Rifle Association, which boasted that its membership surged to around five million in the aftermath of the Sandy Hook school shooting.

Gun violence and terrorism: The US spends more than a trillion dollars per year defending itself against terrorism, which kills a tiny fraction of the number of people killed by ordinary gun crime.
According to figures from the US Department of Justice and the Council on Foreign Affairs, 11,385 people died on average annually in firearm incidents in the US between 2001 and 2011.

In the same period, an average of 517 people were killed annually in terror-related incidents. Removing 2001, when 9/11 occurred, from the calculation produces an annual average of just 31. 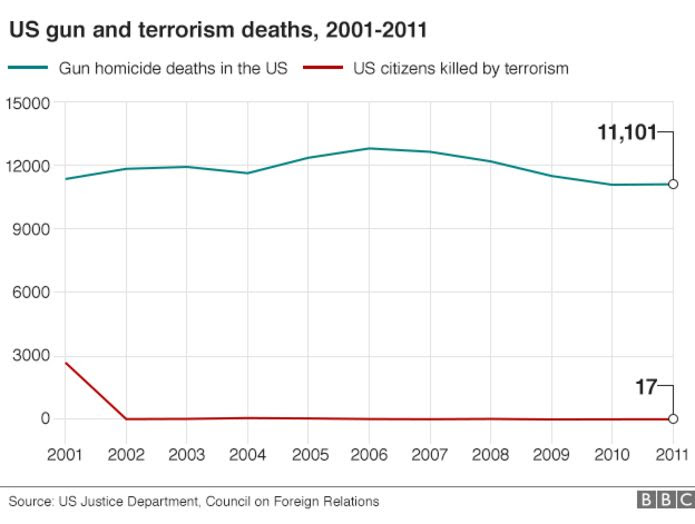 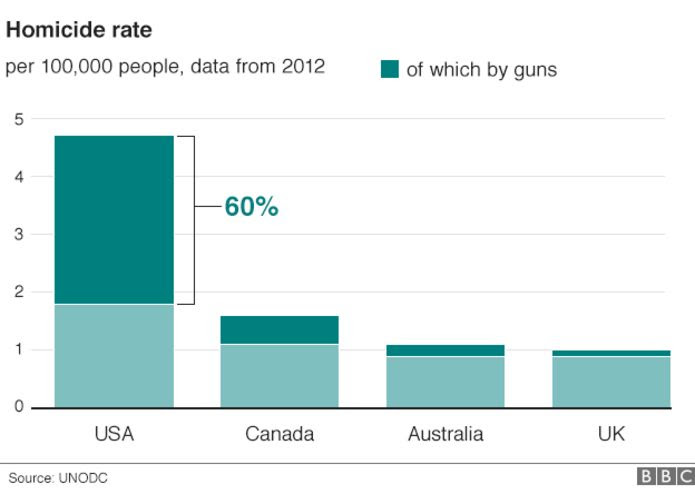 As I have written, in The Misleading Statistics of Gun Control,


most of these mass shootings occur between criminal gangs. To learn that a gangster has been, or a group of gangsters have been, shot dead will simply not touch the average citizen — American or foreign — as much as the innocent dead of Orlando or Utøya. And rightly so, since violence is part of their calling, of their chosen profession, if you will. (Which is why — even left-leaning — journalists don't mention those killings in the first place; except, of course, as part of the respective city edition's metro section.)

Thus, "bare" figures of 11,000 killed by guns compared to 17 (or to 31 or to 517) killed by terrorism is misleading because the statisticians, deliberately or otherwise, fail to take into account everyday average beta people who are gunned down with hardly any warning as contrasted with thugs who are in an "occupation" in which shooting by firearm is, shall we say, an accepted risk.

A similar remark concerns "the death toll between 1968 and 2011 [eclipsing] all wars ever fought by the country"; the statisticians would have you believe the dead, like the citizen soldiers on the battlefield, all amount to be the same average all-American red-blooded Joe.

Finally, while the people using weapons in Canada, Australia, and the UK are almost certainly (of necessity, due to their respective gun control laws) outlaws killing people, whether a fellow outlaw or a law-abiding citizen, the shootings in the U.S. might very well be a law-abiding citizen (successfully) defending him- or herself against an criminal, whose "career" he or she helped bring to a close.

From the numbers above, moreover, it is not immediately apparent that, in fact (as Erick Erickson puts it),


mass shootings in the United States have fallen so much in the past century that the political left has insisted we redefine what a mass shooting is.

Indeed, when we think of a mass shooting, don't we think of a dozen people dead, minimum, or certainly at the very least half a dozen. Check out the BBC's numbers:

You hardly need a calculator to figure out that 371/475 is less than 1.5 (!) people killed on average per mass shooting (along with four wounded or more). In other words, the average number of dead bodies per "mass" shooting — as redefined downwards — turns out to be between… one and two! And closer to one, at that! (And with the assailant being included nowadays, wouldn't that mean that a "mass" shooting might include one in which the only dead person turns out to be the criminal himself?!)

It takes an Erick Erickson to take an even deeper perspective on these "factual" statistics.


There are more than 300 million guns in private hands in the United States and more than 2 trillion rounds of ammunition in private hands. What we are seeing is not an out of control gun problem. In fact, mass shootings in the United States have fallen so much in the past century that the political left has insisted we redefine what a mass shooting is. It is all in the name of gun control.

… Conservatives look on these acts, whether it be Baton Rouge or Ferguson or Orlando or Dallas and they see a world in moral collapse and struggles between good and evil. Black families have crumbled. Black fathers are in jail while the mothers struggle to keep the family together. Unemployment among black youth is high and people of faith understand that there is something soul nourishing about work. Even in the Garden of Eden there was work.

But we cannot even talk about the Garden of Eden because the left laughs it off. Morality, faith, prayer, and concepts of good and evil are all rejected by the left. So they grasp for something on which they can make a principled stand and it is gun control and the erosion of a right the left refuses to recognize in the second amendment.

Secular reporters lament that there are too many guns in America, but they will not admit there is too much moral decay. In fact, they not only revel in the moral decay and defining deviancy as normal and normal as deviant, but they expect the rest of us to do the same. If you uphold natural law or moral law, you are a bigot.

Because they cannot talk about a morality they no longer recognize or the need for a God they long ago rejected, they are forced to insist more laws will solve problems. It is the metaphysical equivalent of the religious believing more prayer will solve problems. When God is traded in for government, prayer gets traded in for law. The more laws there are, the better off we will be because government is our god now. 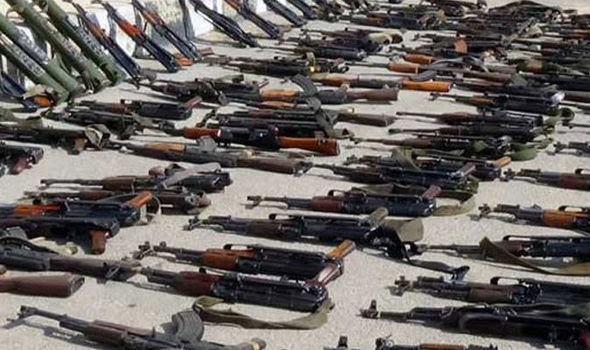 See also: What Is to Blame for Mass Shootings?
Does the Blame Lie with the Right to Bear Arms Or Can It Be Found Elsewhere?

Update: Meet the Moral Equivalence on 'Meet the Press' After Dallas Attack on Police by Jack Dunphy (thanks to Ed Driscoll)


… on Sunday’s Meet the Press, crime was scarcely mentioned. Only Charles Ramsey, former commissioner of the Philadelphia Police Department, mentioned the 13,000 murders that occur every year in the United States, yet he couldn’t go so far as to note that about 6,000 of those murders are committed by blacks against other blacks.

Perhaps most galling about the discussion was the way in which some of the guests seemed to draw a moral equivalence between the atrocity in Dallas and the police shootings that engendered the Black Lives Matter protest that preceded it. Asked by Chuck Todd if he was concerned about the state of race relations in America, Homeland Security Secretary Jeh Johnson struck a politically cautious but morally obtuse note. “Well, I am concerned, Chuck,” he said. “And I think at a time like this when tensions are high, in the wake of events in Dallas and Baton Rouge and Minnesota and elsewhere, it's important to remember that just as the shooter on Thursday night is not reflective of the broader movement to bring about change in police practices, that any police officer who engages in excessive force is not representative of the larger law enforcement community, which with increasing frequency, reflects the community at large.”

Note what Johnson did there. Tensions are high, he says, because of “events” in Dallas, Baton Rouge, and Minnesota, all of which were, in his apparent opinion, equally objectionable. What rubbish.

… it’s so discouraging to see these incidents lumped together with the Dallas shooting as though they were two sides of the same coin. Micah Johnson, the killer in Dallas, did not overreact in performance of a lawful duty. Motivated by his self-confessed hatred for white people in general and white police officers most especially, he set out to kill as many of them as he could. Yet the Wise Ones on Meet the Press couldn’t bring themselves to make that distinction lest they appear racially insensitive.