Trump is the Republican Party’s monster, yes; But what he represents is also part of the Obama legacy

glee over their rivals’ self-immolation, and fear that what arises from the destruction will be worse.

What it hasn’t inspired is much in the way of self-examination, or a recognition of the way that Obama-era trends in liberal politics 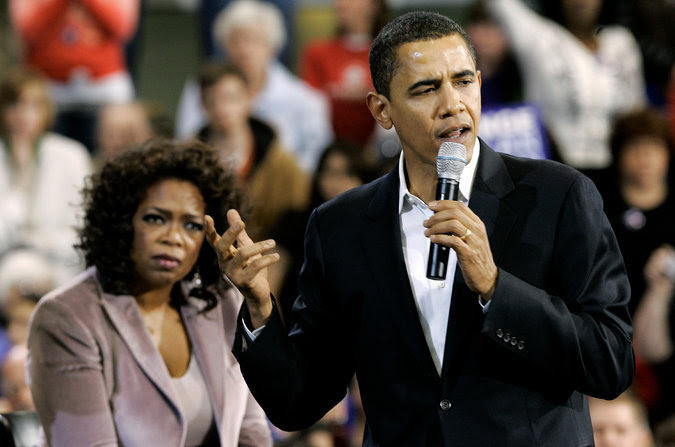 have helped feed the Trump phenomenon.

… Trumpism is also a creature of the late Obama era, irrupting after eight years when a charismatic liberal president has dominated the cultural landscape and set the agenda for national debates. President Obama didn’t give us Trump in any kind of Machiavellian or deliberate fashion. But it isn’t an accident that this is the way the Obama era ends — with a reality TV demagogue leading a populist, nationalist revolt.


First, the reality TV element in Trump’s campaign is a kind of fun-house-mirror version of the celebrity-saturated Obama effort in 2008. Presidential politics has long had an escalating celebrity component, a cultish side that’s grown ever-more-conspicuous with time. But the first Obama campaign raised the bar. The quasi-religious imagery and rhetoric, the Great Man iconography and pillared sets, the Oprah endorsement and Will.i.am music video and the Hollywood stars pledging allegiance — it was presidential politics as one part Aaron Sorkin-scripted liturgy, one part prestige movie’s Oscar campaign.

… If Obama proved that you can run a presidential campaign as an aspirational cult of personality, in which a Sarah Silverman endorsement counts for as much as a governor or congressman’s support, Trump is proving that you don’t need Silverman to shout “the Aristocrats!” and have people eat it up.

He’s also proving, in his bullying, overpromising style, that voters are increasingly habituated to the idea of an ever more imperial presidency — which is also a trend that Obama’s choices have accelerated. Having once campaigned against his predecessor’s power grabs, the current president has expanded executive authority along almost every dimension: launching wars without congressional approval, claiming the power to assassinate American citizens, and using every available end-around to make domestic policy without any support from Congress.


… that [right-wing] Caesarist, crucially, is rallying a constituency that once swung between the parties, but that the Obama White House has spent the last eight years slowly writing off. Trump’s strongest supporters aren’t archconservatives; they’re white working-class voters, especially in the Rust Belt and coal country, who traditionally leaned Democratic and still favor a strong welfare state.

These voters had been drifting away from the Democratic Party since the 1970s, but Obama has made moves that effectively slam the door on them: His energy policies, his immigration gambits, his gun control push, his shift to offense on same-sex marriage and abortion. It was possible to be a culturally conservative skeptic of mass immigration in the Democratic Party of Bill Clinton. Not so anymore.

… liberalism still needs to reckon with the consequences. As in Europe, when the left gives up on nationalism and lets part of its old working class base float away, the result is a hard-pressed constituency unmoored from either party, and nursing well-grounded feelings of betrayal.

He is the Republican Party’s monster, yes. But what he represents is also part of the Obama legacy — a nemesis for liberal follies as well as conservative corruptions, and a threat to both traditions for many years to come.