RIP Adrian Frutiger, the Font Designer I Had a Spat With 20 Years Ago 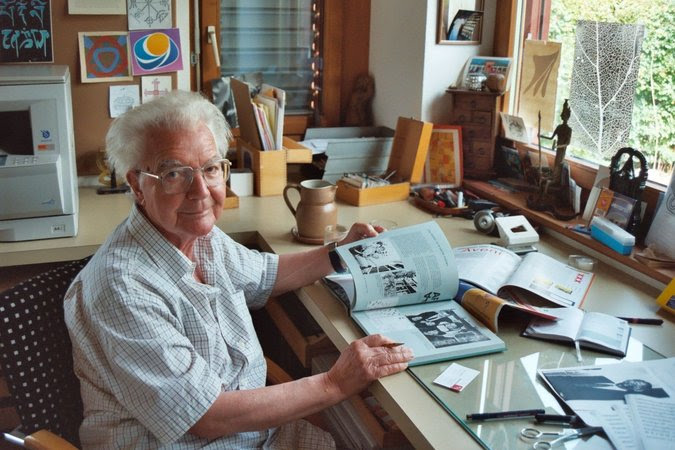 For more than 50 years, Adrian Frutiger made the world legible

writes Margalit Fox in her New York Times obituary. Twenty years ago, I had a verbal run-in with the Swiss type designer, through the pages of the International Herald Tribune, in which I appealed to the bible of the advertising industry.


Anyone who has had to strain his eyes to make out a street sign or a highway direction at night, read arduously through a monument inscription, or decipher a direction from the far side of 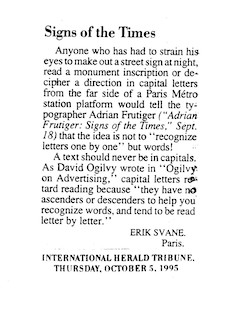 a Paris Métro platform would tell typographer Adrian Frutiger that the idea is not to "recognize letters one by one" (back page, Sept. 18 [1995]), but words!

Thus, a text, whatever it is (even a headline or a brief pair of terms), should never be in capitals.  As David Ogilvy of Ogilvy & Mather writes in "Ogilvy on Advertising" — the definitive book on the ad world — "The eye is a creature of habit.  People are accustomed to reading books, magazines and newspapers in lower case."  It has been established that "Capital letters are extremely difficult to read" and "retard reading.  They have no ascenders or descenders to help you recognize words, and tend to be read letter by letter."

Back to the Margalit Fox's obituary:

A type designer who died on Sept. 10 at 87 in his native Switzerland, Mr. Frutiger created some of the most widely used fonts of the 20th century, seen daily in airports, on street signs and in subway stations around the world.

Mr. Frutiger, whose career spanned the era of hot lead and the age of silicon, created some 40 fonts, a vast number for one lifetime. Praised for an elegant readability that belied their rigorous engineering, his typefaces over the years have graced signs in the Paris Métro and many international airports, and on Swiss highways and some London streets.

His best-known fonts include Univers, employed throughout the design of the 1972 Olympic Games in Munich, and Frutiger, ubiquitous on airport signage, including that of John F. Kennedy International Airport in New York and Charles de Gaulle Airport in Paris.


“Frutiger is basically the best signage type in the world because there’s not too much ‘noise’ in it, so it doesn’t call attention to itself,” Erik Spiekermann, a prominent German type designer and friend of Mr. Frutiger, said by telephone on Wednesday. “It makes itself invisible, but physically it’s actually incredibly legible.”


Commissioned to create signage for airports and subway systems, Mr. Frutiger soon realized that fonts that looked good in books did not work well on signs: The characters lacked enough air to be readable at a distance. The result, over time, was Frutiger, a sans serif font designed to be legible at many paces, and from many angles.

One of Frutiger’s hallmarks is the square dot over the lowercase “i.” The dot’s crisp, angled corners keep it from resolving into a nebulous flyspeck that appears to merge with its stem, making “i” look little different from “l” or “I.” (For designers of sans serif fonts, the gold standard is to make a far-off “Illinois” instantly readable.) 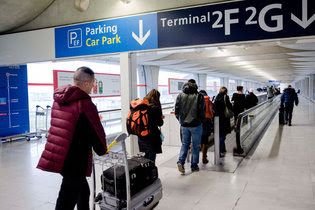 As conspicuous as Mr. Frutiger’s work became, it was for its inconspicuousness, he said, that he hoped it would be known.

“The whole point with type is for you not to be aware it is there,” he said in an interview on the Linotype company’s website. “If you remember the shape of a spoon with which you just ate some soup, then the spoon had a poor shape.” He added: