The "Daisy" Graphic Novel Is Noticed by the Media 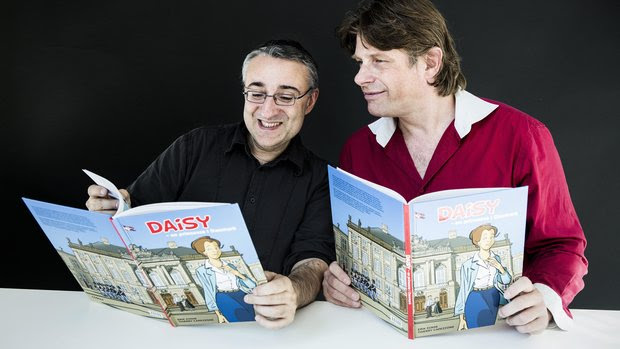 The new graphic novel on the life and times of Denmark's Princess Margrethe before she became queen has received quite a deal of notice in the Danish press since Cobolt published it on September 16, from Billed Bladet and Ugeavisen to Politiken and Jyllands-Posten.

The longest article on Daisy — en prinsesse i Danmark came in the form of a full two-page spread authored by Kristian Lindberg in Berlingske Tidende (incidentally one of the oldest newspapers on the planet).

The book has also been noticed in the English- and Spanish-language press.

Finally, Erik Svane and Thierry Capezzone were interviewed on national TV, with questions from Aftenshowet's Louise Wolff.
Posted by Erik at 22:42