A French contempt for Obama's zigzag about Iran: Obama's pastels-and-wispy-brushstrokes rendering of reality 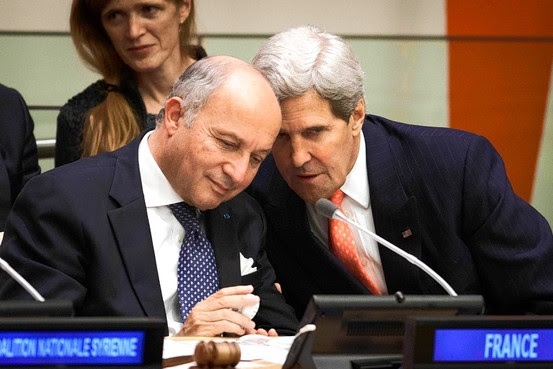 Fed up with U.S. waffling, France may be ready to take a harder line on Iran

writes John Vinocur in a piece entitled "France Covers Obama's Middle East Retreat" appearing in the… Wall Street Journal. (Question: has the most conservative commentator of the New York Times been fired, now that the name International Herald Tribune has been relinquished?)


In an interview with the Associated Press on Oct. 4, Barack Obama depicted Iran as a country living with sanctions "put in place because Iran had not been following international guidelines, and had behaved in ways that made a lot of people feel they were pursuing a nuclear weapon."

For French Foreign Minister Laurent Fabius, that was a pastels-and-wispy-brushstrokes rendering of reality. Two days later, in an interview with Europe 1 radio, Mr. Fabius drew a darker, edgier picture. "As we speak," he said, Iran keeps the centrifuges turning that are needed to make enriched uranium for nuclear bombs. But Iran is also pursuing a second, separate track toward atomic weapons with the construction, at Arak, of a heavy-water reactor producing plutonium.

That project might take "around a year" to complete. And "if it is completed, you won't be able to destroy it," Mr. Fabius said, "because if you bomb plutonium, it will leak." At that point, he said, for "the Americans, the Israelis and others," there would no longer be adequate sanctions to stop Tehran.

He gave no hint of who those "others" might be. But here was the French foreign minister talking about a possible military engagement against Iran in a more forceful manner than anything summoned so far by the U.S. president. Mr. Fabius was not advocating a strike, volunteering eventual French participation, or indulging in simple Obama-bashing. 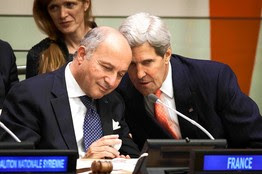 But he was expressing a kind of French contempt for the U.S. administration's evasive vocabulary about the Iran endgame.

… Camille Grand, the director of the Paris-based Foundation for Strategic Research, argues that this France is different. Think of its first-in role in Libya, its successful military operation against al Qaeda in Mali, its readiness to strike Syria alongside America—at least until Mr. Obama's reversal, which left French President François Hollande "flabbergasted," according to Le Monde.

It's a view that jibes with France's experience with Mr. Obama's erratic policy. Last October, the White House contacted both France and Britain to say that America would move to an interventionist position on Syria akin to theirs after the November U.S. election. Pfft. Both French and British officials told me that after being kept in the dark for two months, they learned in January this year that the White House plan was dead.

A French official also said that in a discussion on Mali in October 2012, former U.S. Defense Secretary Leon Panetta promised, referring to an eventual French incursion, "Whatever you need, ask me. You'll get it."

As it turned out, the White House overruled Mr. Panetta, according to the official. The administration actually asked France for cash in exchange for tanker aircraft to support French forces when they entered Mali in January. Once the $50,000 per hour charge for planes to confront al Qaeda had become a news story, it was dropped.

Last week, I asked an Élysée Palace official about the solidity of two parts of the notional French position: One, that the Iranian mullahs must officially "renounce" their nuclear-weapons ambitions, and two, that they must make an unmistakable "strategic leap" that would demonstrate they are not trying to retain options that could possibly lead to making a bomb.

The official said: "To have credibility on security issues like Iran you must be firm and consistent, and not zigzag," choosing a kind of semi-polite international code word to describe Mr. Obama's course on Syria.

But French diplomacy is not the U.S. Congress, which has been demonstrably tougher than the White House or France on sanctions (and possibly other alternatives) to punish Tehran's endless defiance. …