While the French government's (foxy) spokes(wo)man declined to make any comments regarding Gérard Depardieu's being granted Russian citizenship, France's president has had a long telephone conversation with the actor. 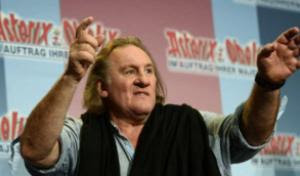 Nounours told Flanby — to use the two mens' respective nicknames —that he was sickened by what was happening at the moment and that media had been dreadful with him.

Depardieu added that the fiscal aspect of his grievances was only one detail thereof, and that his main gripe was with the fact that, "in France, people who are successful and who take initiatives are spat upon."

This interesting item from Gégé's friend, who commented about the conversation to the Morandini website:

"When you are a politician", says Arnaud Frilley without the least bit of protest or even of surprise, "one always listens to a popular figure who speaks to you."

Meanwhile, learning of Vladimir Putin's decision, Beligum has started digging in its heels: "Nationalities is not something that can be collected," opined one federal deputy.

Not helping the French government's case is the fact that a tennis star who was bestowed a significant ribbon (Jo-Wilfried Tsonga was named Chevalier dans l'Ordre National du Mérite) turns out himself to be a fiscal exile, albeit one living in Switzerland.

What are Prime Minister Jean-Marc Ayrault's morality lessons to Nounours worth, asks the Moranidini web site, when the prime minister bestows a decoration on a sports star who provided the film actor with a blueprint for his actions?

Related: Check out the meaning of the last name Depardieu
and why it is particularly appropriate for the movie star
Posted by Erik at 00:17