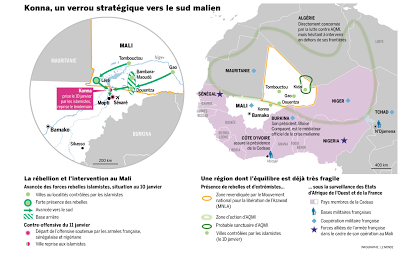 Le Monde has a map of the opposing forces in Mali — French troops versus Al Qaeda — and how the geography of the west African country makes the central part's Konna (a town recaptured from the rebels by the French) a strategic gatehouse (click on the map for a larger image thereof) to either the southwest or the northeast. 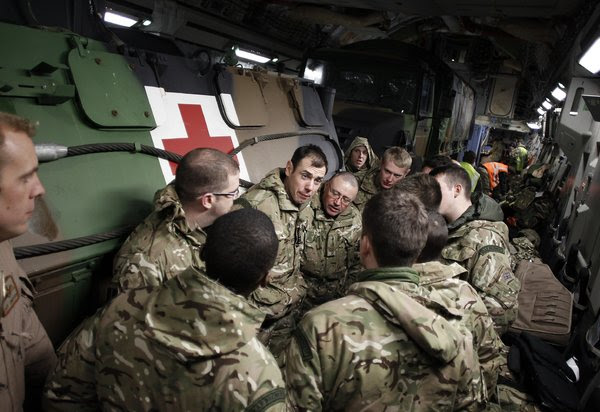 French fighter jets struck deep inside Islamist strongholds in northern Mali on Sunday, shoving aside months of international hesitation about storming the region after every other effort by the United States and its allies to thwart the extremists had failed.


For years, the United States tried to stem the spread of Islamic militancy in the region by conducting its most ambitious counterterrorism program ever across these vast, turbulent stretches of the Sahara.

But as insurgents swept through the desert last year, commanders of this nation’s elite army units, the fruit of years of careful American training, defected when they were needed most — taking troops, guns, trucks and their newfound skills to the enemy in the heat of battle, according to senior Malian military officials.

“It was a disaster,” said one of several senior Malian officers to confirm the defections.
Then an American-trained officer overthrew Mali’s elected government, setting the stage for more than half of the country to fall into the hands of Islamic extremists. American spy planes and surveillance drones have tried to make sense of the mess, but American officials and their allies are still scrambling even to get a detailed picture of who they are up against.

Now, in the face of longstanding American warnings that a Western assault on the Islamist stronghold could rally jihadists around the world and prompt terrorist attacks as far away as Europe, the French have entered the war themselves.


First, they blunted an Islamist advance, saying the rest of Mali would have fallen into the hands of militants within days. Then on Sunday, French warplanes went on the offensive, going after training camps, depots and other militant positions far inside Islamist-held territory in an effort to uproot the militants, who have formed one of the largest havens for jihadists in the world.

Some Defense Department officials, notably officers at the Pentagon’s Joint Special Operations Command, have pushed for a lethal campaign to kill senior operatives of two of the extremists groups holding northern Mali, Ansar Dine and Al Qaeda in the Islamic Maghreb. Killing the leadership, they argued, could lead to an internal collapse.

But with its attention and resources so focused on other conflicts in places like Pakistan, Yemen, Somalia and Libya, the Obama administration has rejected such strikes in favor of a more cautious, step-back strategy: helping African nations repel and contain the threat on their own.

Over the last four years, the United States has spent between $520 million and $600 million in a sweeping effort to combat Islamist militancy in the region without fighting the kind of wars it has waged in the Middle East. The program stretched from Morocco to Nigeria, and American officials heralded the Malian military as an exemplary partner. American Special Forces trained its troops in marksmanship, border patrol, ambush drills and other counterterrorism skills.

But all that deliberate planning collapsed swiftly when heavily armed, battle-hardened Islamist fighters returned from combat in Libya. They teamed up with jihadists like Ansar Dine, routed poorly equipped Malian forces and demoralized them so thoroughly that it set off a mutiny against the government in the capital, Bamako.

A confidential internal review completed last July by the Pentagon’s Africa Command concluded that the coup had unfolded too quickly for American commanders or intelligence analysts to detect any clear warning signs.

“The coup in Mali progressed very rapidly and with very little warning,” said Col. Tom Davis, a command spokesman. “The spark that ignited it occurred within their junior military ranks, who ultimately overthrew the government, not at the senior leadership level where warning signs might have been more easily noticed.”

… “The aid of the Americans turned out not to be useful,” said another ranking Malian officer, now engaged in combat. “They made the wrong choice,” he said of relying on commanders from a group that had been conducting a 50-year rebellion against the Malian state.

… as Islamists pushed south toward the capital last week. With thousands of French citizens in Mali, its former colony, France decided it could not wait any longer, striking the militants at the front line and deep within their haven.

Some experts said that the foreign troops might easily retake the large towns in northern Mali, but that Islamist fighters have forced children to fight for them, a deterrent for any invading force, and would likely use bloody insurgency tactics.

“They have been preparing these towns to be a death trap,” said Rudy Atallah, the former director of African counterterrorism policy for the Pentagon. “If an intervention force goes in there, the militants will turn it into an insurgency war.”

Is that defeatism we see coming from the Pentagon in the Obama years in the final paragraph?
Posted by Erik at 10:11