Led by the volatile and media savvy Nigel Farage, the UKIP is threatening to become the 3rd-largest party in Britain

From London, Landon Thomas Jr reports in the International Herald Tribune that


Wednesday night, despite intense lobbying by [Prime Minister David Cameron], a large faction of euro-skeptic Conservative rebels joined forces with members of the Labour Party to defeat a proposal backed by the prime minister on the European Union’s pending 1 trillion euro, or $1.3 trillion, budget. 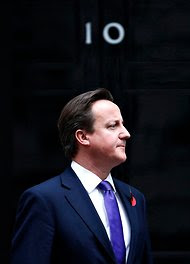 Although Mr. Cameron wants Europe to exert budgetary discipline, his measure would have supported allowing European Union spending to increase at the rate of inflation over the seven-year life of the budget.

Labour has traditionally been pro-European Union. But Labour members of Parliament, along with the Conservative renegades, argue that at a time of deep public-sector cuts in Britain, accepting less than similar spending reductions by the European Union would be intolerable.

… Having had to curb his party’s vehement anti-Europe sentiments in deference to his coalition government with the Liberal Democrats, the most pro-Union of all the major British parties, Mr. Cameron now is facing an outright rebellion in his party.


… If Mr. Cameron were to return from Brussels with a budget in which spending was not cut, his political position could become all the more precarious.

He is almost certainly aware that his predecessors, Margaret Thatcher and John Major, both were fatally weakened because they could not unite their Conservative Party over Europe.

As many European leaders use the economic crisis to push for a more federal Europe, British popular opinion is pulling in the opposite direction.

The most concrete example is the rapidly rising popularity of the United Kingdom Independence Party, which advocates Britain’s outright exit from the European Union.

Led by the volatile and media savvy Nigel Farage, the Independence Party is now threatening to overtake the Liberal Democrats to become the third-largest party in Britain, after the Conservatives and Labour.