Ronald Reagan and Chris Christie, Two Men Who Could Teach Barack Obama a Thing or To If he Were Less Ideological and Willing to Listen

Perhaps the hardest thing for Mr Obama to accept about Reagan is that Americans warmed to him not just because of what he did but also because of the sort of person he was. [Lou Cannon (“President Reagan: the Role of a Lifetime”, a whopping biography of more than 800 pages)] argues that his political magic did not reside only in his happiness and folksy charm. His greatness was that “he carried a shining vision of America inside him.” He had a simple belief that nothing was impossible in America if only government got out of the way. In rejecting the idea of limits, says Mr Cannon, he expressed a core conviction of the nation

(which, in good ol' MSM fashion, seems intent on highlighting the Gipper's failures — alleged or otherwise), The Economist, in accordance with a cover story on the worldwide need for a confrontation with the public sector unions, also publishes a much more positive story on Chris Christie.

The governor has also faced down the teachers union. He has told pupils it is the union’s fault, not his, that they don’t have pens and paper. He has blasted the union for “using students like drug mules to carry information”. He hates teacher tenure, which he says protects bad teachers, 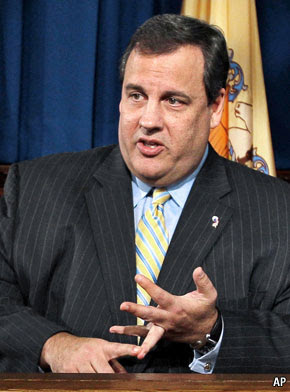 who should be “carried out on a rail”. The unions are listening. In December they put forward a tenure-reform proposal; Mr Christie thinks it is still inadequate.

…Polls show that he is viewed more favourably now than when he was elected. His message is resonating not just in New Jersey, but across the country, tapping into the same frustration that created the tea-party movement. Mr Christie is using his bully pulpit in a way no other New Jersey governor has done in modern history. And he has another useful political skill: he keeps people off guard, never quite knowing whether the extra-large governor is going to beat them up or embrace them.

No wonder some conservatives hope for a Christie presidential run.