Are you ready to accept your share of the blame for Obama's collapsing poll numbers? If only "spoiled Americans" would stop nitpicking his amazingly successful run as president, our country would be less child-like, or something like that.

In the face of ominous poll data splashed on the front page of today's Washington Post, libtalkers were in a tough position today. But only ultra-partisan Democratic Party crony Bill Press could manage to blame voters for Obama's failure to thrive.

…then Americans should go through some sort of reeducation centers 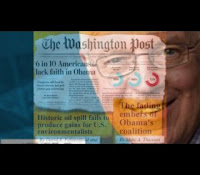 (or re-education camps) to be made to understand the good they are being bestowed, and to be made to refrain from criticizing (at least, not too much) the Spiritual Guide who is benevolently bestowing them upon us;

…then democracy should be curtailed and elections banned (polls as well, probably), at least temporarily, so that the benevolent Great Helmsman can implement his (benevolent) policies in the absence of obstacles from clueless idiots — be they common citizens or the unpatriotic naysayers in the opposition;

…in fact, then Barack Obama should be allowed to dictate his (benevolent) policies to the nation (the nation of clueless clods who are preventing him from carrying those dashing avant-garde ideas of his through to completion).

Of course, Bill Press is not saying this — he might even deny, quite sincerely, saying anything to that effect if he were told so in those exact words; still, this is inescapably the end result if his "viewpoints" are taken to their logical conclusion…

(And liberals, leftists, and statists wonder why, and think we are exaggerating when, some of us issue warnings about socialism and when we warn about it being a path to tyranny?!)

Update: thanks to Instapundit (again)…

Related: The Only Good Woman Is a Leftist Woman
Posted by Erik at 13:15