Where to put this story? In the global warming department, in the French hospitality department, or in the let's-turn-everything-over-to-government-run-services department?

More than 2,000 people spent hours trapped inside the Channel Tunnel after five Eurostar trains broke down due to cold weather. 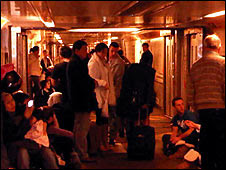 The trains failed as they left the cold air in northern France and entered the warmer tunnel.

Some passengers were evacuated via service tunnels to car trains, while others were kept on their trains. Many have faced gruelling 15-hour journeys.

…Lee Godfree, a passenger evacuated from one of the stranded trains, said he and his family had arrived in Folkestone at 0500 GMT, having left Disneyland Paris at 1837 GMT.

He said their journey had been a "complete nightmare".

"We were without power. We ran out of water, we ran out of food and there was very, very poor communication from the staff," he told the BBC.

"We lost air conditioning when we lost the power. We had to open the emergency doors ourselves.

"The evacuation procedure we followed was one that we set down ourselves."

Check out the video at Ashford International at 00:15

We was actually treated like animals … Everyone made out they couldn't speak English … They went mh, mh, mh [imitating the raising of shoulders in the Gallic fashion]

The people who run Eurostar, the French people over there, I've never met such a rude, ignorant bunch of people in my life! Disgraceful, disgraceful…