That whole brotherhood of man thing... 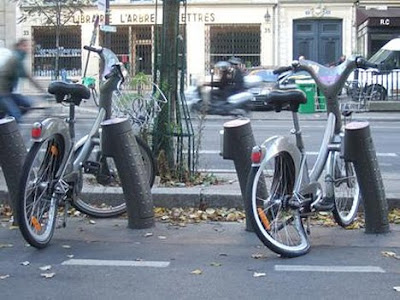 ... sure does work out well, on paper at least:

Just as Le Corbusier's white cruciform towers once excited visions of the industrial-age city of the future, so Vélib’, Paris’s bicycle rental system, inspired a new urban ethos for the era of climate change.

Residents here can rent a sturdy bicycle from hundreds of public stations and pedal to their destinations, an inexpensive, healthy and low-carbon alternative to hopping in a car or bus.

But this latest French utopia has met a prosaic reality: Many of the specially designed bikes, which cost $3,500 each, are showing up on black markets in Eastern Europe and northern Africa. Many others are being spirited away for urban joy rides, then ditched by roadsides, their wheels bent and tires stripped.

With 80 percent of the initial 20,600 bicycles stolen or damaged, the program's organizers have had to hire several hundred people just to fix them. And along with the dent in the city-subsidized budget has been a blow to the Parisian psyche.

"The symbol of a fixed-up, eco-friendly city has become a new source for criminality," Le Monde mourned in an editorial over the summer. "The Vélib’ was aimed at civilizing city travel. It has increased incivilities."