Islamic nazis are crushing dissent in Iran, and Obama talks about "lively debate"; in Honduras, meanwhile, Obama Interferes to back a Chávez proxy

Take this hypothetical: imagine that Barack Obama announced that he was going to hold a referendum on legalizing a third term for himself. Imagine that even his attorney general, Eric Holder, advised him that it was illegal. Imagine that the Supreme Court ruled that holding the referendum was unconstitutional. In spite of that, let's imagine that Obama coerced the FEC into holding the referendum anyway. Then - let's further imagine -- we found out that Venezuelan strongman Chávez (who has pulled off a similar power grab in his own country) was financing the referendum. What should the Joint Chiefs do in such a case? And if they removed Obama from office, would they be destroying the Constitution or preserving it?

That is the question asked by Pamela Geller on American Thinker (gracias para Larwyn). Oliver North has more.

This is exactly what has occurred in Honduras, to a tee. …

Obama is on the same side as Chávez, Ortega and the Castro brothers. 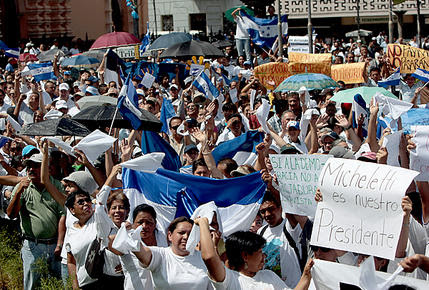 And the irony is thick. In a press conference on June 23, Obama said: "I've made it clear that the United States respects the sovereignty of the Islamic Republic of Iran, and is not interfering with Iran's affairs." He never called upon the Iranian mullahs to "respect democratic norms." On the contrary, he ostentatiously refuses to "meddle" in Iran, where individuals are courageously risking life and limb for the idea of free elections. Brutal Islamic nazis are crushing dissent, and Obama talks about "lively debate." Former Iranian President Mohammad Khatami spoke out Thursday against what he called a "velvet coup against the people and democracy." Obama has sided with that coup, while in Honduras, Obama and the whores at the United Nations have no qualms about interfering to back a Chávez proxy. On Tuesday, U.N. General Assembly piled on, condemning the "coup" in Honduras and demanding that Zelaya be returned to office. It passed - by acclamation - a resolution calling upon all member states not to recognize the new government.