The Outward Signs of a Failed Society

They are one that quite clearly concludes to itself that a group of people may be hated and detested (using a code or pretext to defeat within the heart of the hater the last vestiges of humanism) – that they would be hated for their origin, religion, and belief. The other necessary leap is for the same lot to find a way to hate individual Jews or any other group at which this primitive tribal hatred is directed, not for what they do, but merely who they are.

Seen on the streets of Paris, playing on a recent series of public service announcements to reinforce the French population’s pride in their own nation and society, and recent MEP election compaign material: 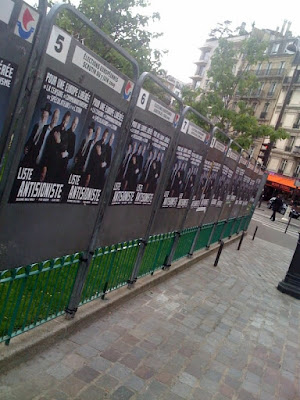 In front of the Mairie in the 13th arrondissement. 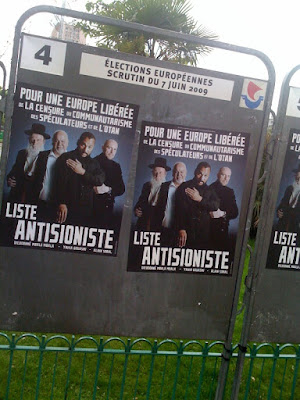 « For a Europe liberated from censorship, affirmative action, financial speculators, and NATO . »
« The Anti-Zionist election list »

Much as I’ve heard the protest that by “Sioniste,” they do not mean all Jews, it’s entirely countervailed by everything the same sort of “anti-sioniste” does or says a minute later. I can’t even find a context in which those people themselves believe the rationalization.

Just like the 1330’s and the 1930’s myth-making and demonizing, Jews are the “money people” who employ others’ strife to cause wars, and they are the only reason an economy could possibly be in recession or go to war. It is nearly up to the level of the kind of theory-forming and hatefullness that you’d find in a 3rd world barrio.

The fact remains that Zionism’s real motives grew out of the actions of virtually the entire European population – it’s superstitions, its’ hatreds, its’ need to find a “genetic” enemy... In the centuries before the 2nd world war, and the years that followed, the obsession with cycles “ethnic cleansing” and repatriation found large population being “sent home” even if they were not born there. As much as they saw a home for the masses of people in DP camps, they wanted to send the Jews, another of many reminders of their inhumanity and hatefulness away – to “home”.

Seeing one opportunity in the history of their religion to do just that, Jews largely agreed – they wanted a place to go, to finally be free of the irrational accusations of “controlling money” as a group, or from the mass murders, forced relocations and pogroms. They wanted a fighting chance to live out their own lives. All of the circumstances that put them in that position were caused by Europeans.

Now in their uneducated, immoral, inhumane social torpor, entirely ignorant of the world, you find at best a strange fantasy of a bureaucratic nullity of a “magical combined land”, and at worst, open agreement that Israel and the Jews need to be effaced from the earth, even though the very thing they detest is the direct product of their own society’s making.

And it’s a society that appears to have not grown enough to genuinely understand what rights are with crowds “demand human rights” or any other cause place-holding for something in their empty lives. If there’s any disease that deserves the kind of “final solution” treatment they skirt around and incrementally try to bring into acceptable speech, it’s the mainstay of European society itself – the one whose past “elected” and unelected dictators, philosophies, movements and ideas, have killed hundreds of millions of people worldwide – from forcable colonization, fascism, socialism, communism, and so on. If humanity is to employ the logic behind what they tacitly hold for the Jews, it should apply to them with the same thoughtless discrimination.

Instead of the world feeding and securing them, and giving them the flattering, “whatever you say, pal,” false importance of being “global leaders” would they prefer that?
Posted by Joe at 17:01