July 4: What the Mainstream Media (in the US and Abroad) Does Not Show You…

While the mainstream media, American and foreign (which otherwise loves to point out superlative events), go on and on about the soldiers' fears, the soldiers' solitude and depression, the soldiers' disenchantment, the soldiers' abandonment by American society, etc, etc, etc, the largest reenlistment ceremony in the history of the U.S. military took place in the rotunda of the Al Faw Palace in Baghdad, Iraq (thanks to Christopher Cook).

Update: Believe it or not, the New York Times actually has a picture prominently featured on its front page, as does the International Herald Tribune. Time to eat crow? Not so fast: the story (beyond the caption) seems to stand totally uncommented and, as for the New York Times front page picture, look at what stands right next to it: an article entitled… Despair Drives Suicide Attacks by Iraqi Women (sigh). 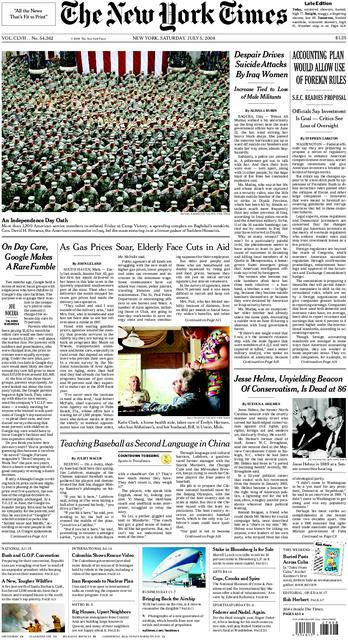