Since Dominique Dhombres praises a French intellectual for chastizing the United States as the modern equivalent of the Roman Empire, I thought it not unhelpful to present one of my favorite scenes from one of my favorite films. In fact, any time somebody talks to me about imperialism, American or other, modern or old, I have to resist the urge to jump the person, tie him to a chair in front of a video player, and show him the scene in a loop for 48 hours straight. 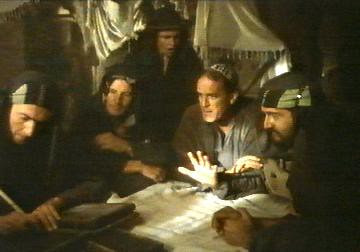 In the scene, the members of one of the most patriotic, determined, extremist, and intransigeant resistance groups fighting against the Roman occupier have gathered in a dark room for a secret meeting. All the men of the People's Front of Judea are masked, except for their leaders, and when the scene starts, the top honcho is ending a pep talk.


Furious about the Roman Empire's occupation of their land, Reg spits out: “They bled us white, the bastards! They’ve taken everything we have.” He continues raving and ranting about how they took everything from their “fathers” and their “fathers' fathers”, before ending with a majestic rhetorical question. “And what have they ever given us in return?” With that, he stops, and crosses his arms, feeling very satisfied. He realizes that he has made one of the best speeches of his career.


Just then, a shy masked commando raises a finger. “The aqueduct…”


“The aqueduct”, repeats the man.


“Oh yeah yeah they did give us that, uh-huh that’s true…”


Another commando, as masked as his colleague, chimes in. “And the sanitation…”


Stan, Reg's second-in-command sitting next to him, intervenes with naïve energy: “Oh yeah, the sanitation, Reg. Remember what the city used to be like.”


Murmurs of agreement rise from the commandos in the room.


The meeting is not at all going in the direction Reg expected it to, and he's starting to lose patience: “Yeah, all right, I’ll grant you the aqueduct and the sanitation are two things the Romans have done…”


Another terrorist interrupts him: “And the roads…”


Reg, brusquely: “Oh well obviously the roads, I mean the roads go without saying, don’t they?! … But apart from the sanitation, the aqueduct, and the roads…”


Other terrorists, who have definitely not understood the purpose of their leader’s speech and his rhetorical question, chime in: “Irrigation” “Medicine” “Education” “Public baths” “And the wine” while their comrades nod and murmur words of agreement (“Yuh, yuh that’s something we’d really miss, Reg, if the Romans left”).


Stan adds, innocently: “And it’s safe to walk in the streets at night now, Reg”. Reg’s lips have become ever more pursed and his expression ever darker as he taps his fingers impatiently, but nobody seems to notice, least of all Francis, Reg’s other neighbor, who adds with joviality: “Yeah, they certainly know how to keep order. Let’s face it, they’re the only ones who could in a place like this!” (general laughter)


Finally, with a sharp voice, Reg cuts the discussion short: “Alright, but apart from the sanitation, the medicine, education, wine, public order, irrigation, the roads, a fresh-water system, and public health, what have the Romans ever done for us?”