Jean-Christophe, the 58 year-old son of François Mitterrand, has been arrested reports the Independent.

His arrest is part of an investigation into yet more allegations of sham dealings and weapons trafficking in Africa. Investigators assert that he was involved in money-laundering through a fake Mauritanian fishery. (Though not charged, J.-C. Mitterrand has been also been under investigation since 2000 for suspected sanctions-busting arms sales to Angola). Mitterrand was detained for questioning and then held over night before his release on Friday, again without being charged.

Mitterrand accuses investigating magistrate Philippe Courroye (who could be the one who ordered his arrest but the sloppy Independent doesn't tell us so we're left to ass-u-me that this is the case) of waging a campaign to sully his father's name.

Mitterrand's bank accounts have been frozen while investigators look into allegations that Mitterrand made large cash payments totalling €600,000 to a Mauritianian company called Iwik (named after a small fishing village), a company Mitterrand incorporated in '97 but that authorities was lifeless until after his last arrest in 2000.

The Independent, sloppy again, writes that "in March, Judge Courroye raided the apartment of M. Mitterrand, and his 80-year-old mother, the president's widow, Danièle Mitterrand, to search for incriminating documents." Are we to believe that J-.C. lives with his mother (the famed advocate of Kurdish interests who, strangely, opposed the invasion of Iraq)?

No French Tanks in IC, "not now, not ever"

Iraq isn't the only place that won't be receiving French tanks on its soil. The French Defense ministry has ruled out sending Leclerc tanks to Ivory Coast, even if the replacements for operation Licorne end up coming from the Leclerc tank regiment in Mourmelon, from which French soldiers have been mysteriously disappearing in alarming numbers.

The 56-ton tank has so far been used only in Kosovo and the Defense ministry officials have also ruled out its use in IC despite the fact that high ranking military officers have found that "the presence of a Leclerc squadron and a mechanized company transported in AMX 10-Ps would have an enormous impact." 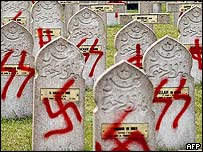 The Beeb reported on Thursday that another Alsatian cemetery for Muslims had been defaced (see photo). This time, the graves belonged to France's Muslim soldiers felled during the First and Second World Wars and buried in Hagenau. President Chirac was, of course, trotted out to make rote remarks about some such or other "insult to the memory of the soldiers who gave their lives for our country."

Such events occurring with increasing frequency (search through the blog, you'll find more examples in a given week than I care to count) and the Beeb says that "about a dozen" similar desecrations of Muslim, Jewish and Christian tombs have been reported in "recent weeks."

Didier Mortet, 49, president of Air France, was murdered as he returned home toward 6:30 pm Thursday night in Port-au-Prince by three men traveling on motorcycles, according to the French embassy. He was in the presence of his Ukranian wife and their driver who was chauffeuring them home from the airport after Mortet's arrival from France. His house is located in the Musseau neighborhood of the capital, as are the Prime Minister's offices. Two of several bullets fired into the car hit Mortet only, once in the arm and once through the heart, killing him instantly. No one has yet claimed responsibility for the assassination.

Unlike the Franco-Cameroonian comedian Dieudonné, another Franco-Cameroonian, novelist Gaston-Paul Effa (actually born in Yaoundé) has publicly announced his enthusiasm for learning about Judaism. Effa contacted Strasbourg professor of Hebrew and Hebrew civilization Gabriel Attias, a Moroccan Jew, in order to learn Hebrew.

Together, they have now published The Jew and the African, a book arguing in favor of cultural exchange. After seven years of study with Attias, Effa speaks of his own astonishment: "One doesn't learn Hebrew like one learns French. Hebrew is a language in which one learns to be astounded by everyday things because Jews have an urgent need to learn," he says.

Writes Dernières Nouvelles d'Alsace, "One does not come away unaffected from reading a work of such profound reflections. Beyond the contrast of African orality and Jewish literacy, different means of transmission, different processes for learning, of the place of woman and her dignity in the two societies, of the attitudes of each community toward death and evil, of African magic and Jewish mysticism, of music and exile, of nature and man, collaborations are born, often supported by historical or biblical references derived in particular from the Jewish tradition. Most of all, reading page after page printed with the ink of generosity, the reader feels engaged."
Posted by Douglas at 16:22