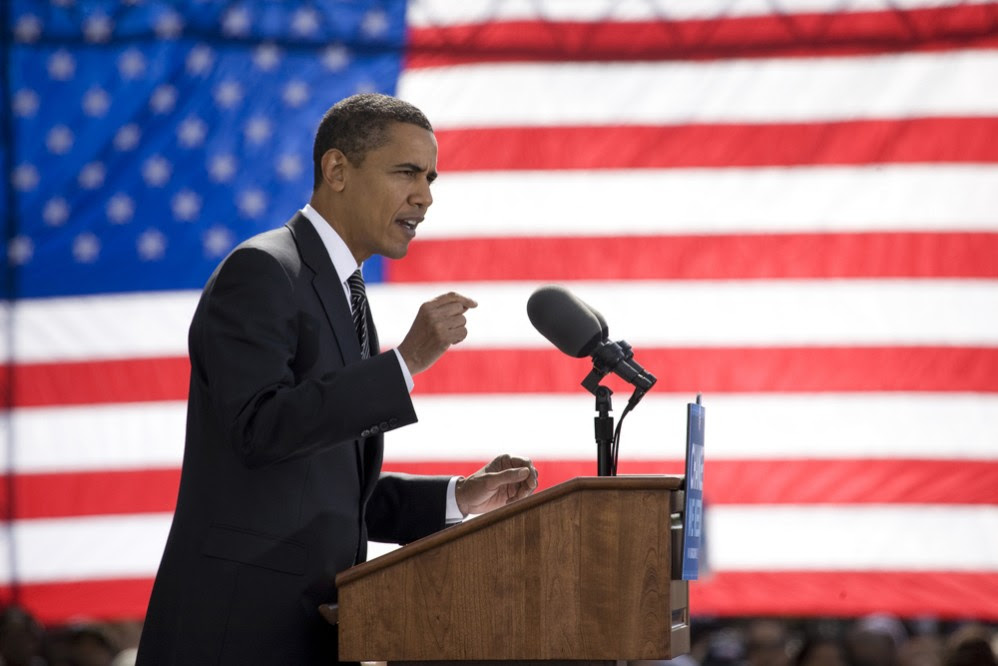 After hearing Barack Obama lecturing us about our intolerance, Robert Tracinski offers us a handy guide to help you know your tropes for the political exploitation of terrorism.

‘Or The Terrorists Win’

This is the claim that people should engage in some utterly ordinary activity — shopping, watching television, eating bacon, etc. — as an act of defiance against terrorism. Because if they don’t do it, “then the terrorists win.”
This trope originated with exhortations from President Bush just after 9/11 for people to keep going about their normal lives in spite of the fear al-Qaeda wanted to instill in them. Which is reasonable enough, I suppose, but then it got out of hand
… Note that in its pure form, Or the Terrorists Win is not about the need to pursue some actual foreign policy that might disrupt or defeat terrorists. It’s about asking us to “go on living our lives as usual” — which means that there is no activity too trivial or mundane that it cannot be recast as an act of defiance against terrorism.


Or the Terrorists Win is no longer a trope, strictly speaking, because it has become a running joke. No one uses it non-ironically any more.
But they are still oh-so-serious about knowing Exactly What ISIS Wants.

The bodies were barely cool in the Paris shootings when we were treated to lectures that “The West Is Giving ISIS Exactly What It Wants,” usually accompanied by very dubious projections of what ISIS wants, which just so happen to correspond to any policy proposed by someone on the American right.


Get that? Don’t destroy ISIS. Don’t bomb them, shoot them, or hunt them down like dogs. That’s exactly what they want!
As absurd as it may sound, this is the specific form Obama used in his appeal to Exactly What ISIS Wants: “We should not be drawn once more into a long and costly ground war in Iraq or Syria. That’s what groups like ISIL want.” To which he then adds: “They know they can’t defeat us on the battlefield.” Strange, then, that they would want to draw us into a war they know they can’t win, isn’t it?
… maybe we should decide our response to terrorism based on our own judgment of our interests, without worrying too much about what ISIS has to say on the matter.

But Exactly What ISIS Wants is the black hole of arguments. It pulls any proposed action against terrorism into its gravitation field and sucks all motion and energy out of it. Which is interesting, because I’m pretty sure that dithering and inaction on our part is exactly what ISIS wants. It has certainly served their interests so far.


But we have not exhausted the tropes for the political exploitation of terrorism, not by a long shot. Exactly What ISIS Wants, for example, is merely an inverted version of Vicarious Terrorism.

Vicarious Terrorism is when you advocate responding to terrorism by taking away the grievances that motivate it — which means, in effect, granting the terrorists’ demands.


The person who makes this argument is not a supporter or sympathizer of the terrorist group in question and would never dream of committing an act of terrorism himself. It’s just that the terrorists’ supposed grievances happen to correspond in some way to his pre-existing agenda, and he just can’t help using the attack to promote that agenda.

… One of the common threads among these tropes — the thing that makes them tropes — is the fact that they are always used to justify a pre-existing agenda. They are less a response to terrorism than an attempt to exploit terrorism to promote or defend an existing political program. …

In Bin Laden Syndrome by Proxy, you take someone else’s terrorist attack, fantasize what you think its causes and motives ought to be according to your world view, then advocate a response intended to address this pretended cause.
In Vicarious Terrorism, the terrorists’ real motives and agenda have some overlap with your own, and you succumb to the temptation to exaggerate the connection and use the attacks to promote your agenda. But in Bin Laden Syndrome by Proxy, the overlap is entirely a product of your own imagination, spurred by naked opportunism.


Probably the best example I have ever seen of Bin Laden Syndrome by Proxy is giving a speech after an ISIS-inspired terrorist attack in which you tell the American people that gun control is now “a matter of national security” — which is exactly what Obama just did. Obviously, he did not start wanting to ban “assault weapons” because a couple of terrorists used them last week. He’s been advocating it all along as his standard response to domestic shootings by crazy people with no ideological motive at all. But these shootings haven’t mobilized the public to support gun control, so he repackaged his argument to connect it to an issue on which people do seem to want strong action.
Then again, maybe that’s not the very best example, because it’s hard to top “climate change caused the Paris attacks.”


What unites Exactly What ISIS Wants and Bin Laden Syndrome by Proxy is that they both help the user avoid addressing the essential cause behind the current terrorism threat: the religion of Islam. This avoidance has spawned a whole constellation of tropes, starting with the assertion that the Islamic State and Islamic terrorism have Nothing to Do with Islam.

‘Nothing To Do With Islam’

“This has nothing to do with Islam” is a standard description for anything bad done by a Muslim in the name of Islam, based on arguments offered by Islamic imams citing quotations from Islamic scripture.
Hence Hillary’s Clinton’s assurance that “Muslims are peaceful and tolerant people, and have nothing whatsoever to do with terrorism” — in response to attacks in Paris by Muslims who were not peaceful or tolerant and had something to do with terrorism.
This is a variant of The Religion of Peace.

‘The Religion Of Peace’

The Religion of Peace is the religion that did not motivate the San Bernardino shootings, the Paris attacks, the Charlie Hebdo massacre, the Fort Hood shootings, the beheading of hostages in Syria, the mass execution of policemen and soldiers in Iraq, the shooting schoolgirls in the head, and so on and on. It definitely didn’t motivate the 9/11 attacks, and that is why it is not even supposed to be mentioned at the Ground Zero museum.
Must be some other faith. Try the Presbyterians.
The purest examples of either trope are when non-Muslims — who endow themselves with the authority to speak on behalf of somebody else’s religion — offer assurances about the essential peaceful and tolerant nature of Islam. This culminates in No True Muslim.

This is a variant on the No True Scotsman trope. In its original inspiration, this is a type of circular reasoning used by a Scotsman to endow his countryman with some particular, virtuous quality. When confronted with the counter-example of a Scot who fails to possess this virtue, he merely declares that the miscreant must be “no true Scotsman.”
In this case, the trope is used by a non-Muslim to disavow the association of Muslims with any negative qualities — particularly religiously motivated violence — by asserting that anyone who commits such violence must be No True Muslim.
Thus, when a British Muslim began stabbing people the London subway and declared, “This is for Syria,” an onlooker was recorded telling the attacker, in impeccable London slang, “You ain’t no Muslim, bruv!”

… But as Hillary Clinton explained above, describing Islamic terrorists as Muslims would “play into their hands.” It is Exactly What ISIS Wants.


You see how it all fits together. If we can’t admit to the real motive of Islamic terrorists or address their actual strategic goals, we need to invent new motives and goals and use these polite fictions to dictate what actions are acceptable and unacceptable as a response. And if we’re going to do that, we might as well invent motives and responses that allow us to remain comfortably in the rut of our established domestic political routine.

In declaring that No True Muslim is inspired by the Religion of Peace to engage in terrorism, which has Nothing to Do with Islam, we invite ourselves to engage in Bin Laden Syndrome by Proxy, because otherwise we might be tempted to do Exactly What ISIS Wants. We had better continue along undisturbed in our pre-existing routine, Or the Terrorists Win.