"Destroy the family, and you destroy society" (Lenin) 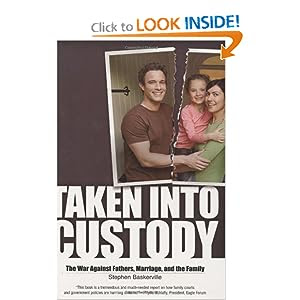 Why is the American family in crisis? Taken Into Custody argues that the most direct cause is the divorce industry: a government-run system that tears apart families, separates children from fit and loving parents, confiscates the wealth of families, and turns law-abiding citizens into criminals in ways they are powerless to avoid.


Taken Into Custody exposes the greatest and most destructive civil rights abuse in America today. Family courts and Soviet-style bureaucracies trample basic civil liberties, entering homes uninvited and taking away people's children at will, then throwing the parents into jail without any form of due process, much less a trial. No parent, no child, no family in America is safe.

About the Author
Stephen Baskerville, Ph.D., is assistant professor of government at Patrick Henry College and Earhart Fellow at the Howard Center for Family, Religion, and Society. A graduate of the London School of Economics, he is the author of more than eighty articles on fatherhood and family issues and has appeared widely on national radio and television programs.

Stephen Baskerville was recently interviewed by Albert Mohler. As he (Baskerville) points out (in Advice to Young Men: Do Not Marry, Do Not Have Children), the divorce industry


makes it very attractive for your spouse to divorce you and take your children. (All this earns money for lawyers whose bar associations control the careers of judges.) While property divisions and spousal support certainly favor women, the largest windfall comes through the children. With custody, she can then demand “child support” that may amount to half, two-thirds, or more of your income. (The amount is set by committees consisting of feminists, lawyers, and enforcement agents – all of whom have a vested interest in setting the payments as high as possible.) She may spend it however she wishes. You pay the taxes on it, but she gets the tax deduction.