The burning of EU flags, rather than the Stars and Stripes, should be a source of pride to Europeans

…the fact that a dozen cartoons - drawings, really - of the Prophet Muhammad that appeared in the Danish daily Jyllands-Posten on Sept. 30, 2005, have led in these early weeks of 2006 to a dozen deaths in Afghanistan, the burning of the Danish Embassy in Beirut, riots in Gaza and appeals for calm from the White House, suggests the rising anger between the West and the Islamic world

writes Roger Cohen in an article whose print version was titled Something is rotten, but not in Denmark (Dan Bilefsky, meanwhile, has the latest news about the Jyllands-Posten editor who published the cartoons).

Yes, anger. Western societies are increasingly exasperated at seeing the Muslim perpetrators of suicide bombings, beheadings and other violence against "infidels" or "apostates" justified or sanctified through references to Islamic texts, be they the Koran itself or the traditions of the Prophet.

These societies are ever more dismayed when they see Islamic radicals, be they from Al Qaeda or agents of Iran's permanent theocratic revolution, claiming to represent a more authentic or pure Islam than the great mass of moderate Muslims. And they wonder why that great mass seems so passive before this affront.

The West, particularly Europe, is also angry that some of the essential liberties and principles of its way of life - not least the equality of men and women, the rights of homosexuals and freedom of speech - appear unacceptable to some of the growing but estranged Islamic communities in their midst.

The compatibility of a Western liberal, democratic society and Islam as a source of law is widely questioned, especially when the thuggery of a male street mob is a frequent expression of the political manipulation of that law.

…Spontaneous demonstrations are an oxymoron in Syria: The holy outrage over the cartoons in the streets of Damascus reveals the lengths to which a regime that once massacred members of the Muslim Brotherhood will go. In Iran, and in the Gaza and West Bank of Hamas, the public fury is also one measure of political unease.

All this restiveness is naturally projected into the Muslim communities of Europe, whose sense of exclusion, justified perception of prejudice and under-representation in politics have produced strong resentments.

It is against this backdrop that the decision of Jyllands-Posten, and later other European papers, to publish the depictions of Muhammad must be seen. If the initial publication was a provocation, it was also a willed one, an act of defiance, a statement that Europe will not be cowed by fear into putting such sacrilegious images off limits.

As Denmark's principled prime minister, Anders Fogh Rasmussen, has put it: "I will never accept that respect for a religious stance leads to the curtailment of criticism, humor and satire in the press."

Rasmussen is right; Europe has to make clear where it stands on its freedoms. And what, say critics, of anti-Semitic cartoons, or insulting depictions of Roma? Why are they not published, too? Are images offensive to Muslims not just a reflection of Europe's disdain for Islam? 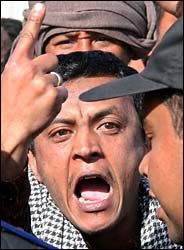 These arguments might carry more weight if radical Islam were not one of the most potent global forces today, its fanatical followers invoking precisely the words or traditions of the Prophet to justify heinous acts.

…By what right can such acts, and their supposed holy inspiration, be ruled unfit material for the political caricaturist or satirist? If moderate Muslims will not rise in unison against this abuse of their religion, it is inevitable that Western observers will seek to express their unease.

And what is to be made of all this outrage emanating from Arab societies where the caricaturing of the Jew is commonplace, the anti-Semitic tract "The Protocols of the Elders of Zion" finds wide credence, and certain media regularly express the view that the Holocaust never happened, or was exaggerated, or was a deserved fate for the Jews?

Repressive Middle East regimes have endured in part through such manipulation of their people's ire. In many respects, this outcry is just another example. It is precisely because the difficult Afghan and Iraqi experiments are also attempts to show respect for different religious and ethnic groups that they are creating such disquiet.

Part of that anger has now been channeled into Danish-inspired Muslim anti-Europeanism. But the burning of EU flags, rather than the Stars and Stripes, should be a source of pride to Europeans. It suggests that Europe stands for something after all.