"An eye for an eye! A tooth for a tooth!" Echoing protests around the world and wearing all kinds of costumes from the Middle East and the Muslim world, 4,000 Islamic demonstrators march through the streets of Paris denouncing the cartoons and the alleged (and convenient) lack of respect towards Islam. 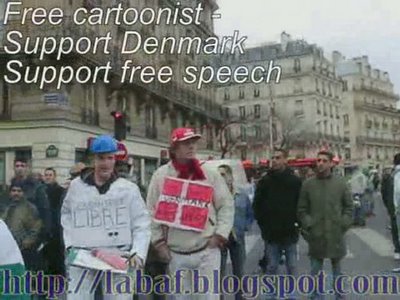 "Ignore them, they are idiots!" reply others as a crowd starts to press around. A rhetorical question rings out: "Would they be carrying out the same provocations in other types of demonstrations?!" (Actually, Monsieur, yes we would and yes we have.)

The Danish American feels like replying that they have done the same to Chirac, to Mitterrand, to the civil servant salons, and to union demonstrations, but suddenly he and the French American start moving away. What has happened is that a short blonde Frenchwoman has tugged on their sleeves and gently but firmly started pulling them away.

"I will show you my ID 10 meters from here" says the plainclothes cop. "They are going to lynch you!" she adds, as she leads us into another street (in the movie taken by our valiant camera team, you can briefly see her wearing a brown coat at 03:45, right after a bearded guy in white cap and tan jacket whine "They are provoking us" and the camera turns).

"Sons of adultery!" "Hey, you two sons of the whore!" Uniformed policemen join us and start rushing us, more and more quickly down the street (I don't want to run, I tell them), with a growing crowd quickening their steps. A police van's door opens. "Go! Go!" shouts a policeman to the driver, "Foncez!" as sirens wail and the van rushes ahead.

"Are you out of your minds?!" ask the two officers. "Do you know how many of them there were?!" "Somebody's got to stand up for free speech", replies the French protester. After staying with us for 20-something minutes, they let us out. (As a departing farewell, I say, "You know, right before you came, we almost had them surrounded.")