The MSM is "an industry that gives itself awards back and forth for courage and bravery—far more than soldiers and firemen do!": Mark Steyn's Speech in Copenhagen (Video)


Among the orations at Copenhagen's 10th anniversary commemoration of the Mohammed cartoons was the 50-minute speech of Mark Steyn (YouTube video).


we were a merry band, all things considered, at Christiansborg Castle. I thank my friend Katrine Winkel Holm, of the Danish Free Press Society, and her delightful sister, Marie Krarup, defense spokeslady for the Danish People's Party, for arranging to host us behind the fortress-like walls of Parliament - so nobody could bust in and shoot us, as they did at a similar free-speech event in February. I was heartened to meet fellow free-speechers who had traveled from Sweden, Norway, Germany, Switzerland, Britain and even Canada. My fellow panelists included Henryk Broder, author of The Last Days of Europe; Vebjørn Selbekk, whom the quislings of Norway's government treated disgracefully for publishing the cartoons; and Douglas Murray, who's already written up the event in The Spectator:


My main message for the audience was to keep in mind that freedom has never been particularly popular. Most people prefer their security and comforts to freedom and although history shows that although everyone benefits from being free, it has always been a small minority who actually pursue and protect the cause. I suppose one has to wrestle whatever comfort one can from that. It was a terrible thing to see the security now needed in Denmark, as elsewhere, for people who are simply asserting their right to write and draw what they want, even – shock horror – things that might be mildly critical of the founder of one religion. That a journalist or historian should need bodyguards in 21st century in an indictment on our continent. But still, surveying the room on Saturday I think we've got enough people. A few Danes, a few Swedes and Norwegians. A few Americans and a couple of Brits might be all that is needed. Perhaps by the 15th anniversary things will be better.

Perhaps. On Europe's present course, though, the security we'll need in 2020 doesn't bear thinking about. But I'll be there.

~A transcript of Vebjørn Selbekk's powerful speech can be found here:


We had interviewed leading Norwegian cartoonists. One of them was Finn Graaf. He is maybe the hardest hitting cartoonist in the history of the Norwegian press. One of his specialities is drawing Israeli prime ministers as Holocaust camp guards. He has done that with almost every Israeli prime minister since Menachem Begin in the late Seventies.
But Mister Graff told us that he would never draw the prophet Mohammad. Not because he had more respect towards the Muslim faith than other religions or ideologies. No, he bluntly put it this way in the interview:

'I have to draw the line somewhere. I do not want to get my throat cut. Therefore I will refrain from drawing Muhammad.'

One-way "hard-hitting" isn't really hard-hitting at all, is it? As I said ten years ago, it's the easiest thing in the world to be tediously provocative with those who refuse to be provoked. 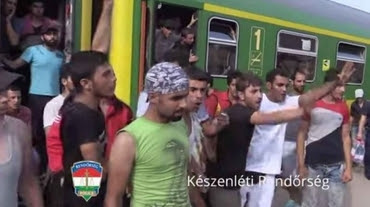 More on Mark Steyn from the files of No Pasarán
Posted by Erik at 22:19